Bail for a DUI Case

Own Recognizance Release and AA Meetings

When it comes to arguing bail for DUI cases in Los Angeles, California, I've been doing it for 25 years now. I know that judges are very cautious about these types of patients because they're always concerned for the public's safety.

That's one of the big things in bail in any case, particularly for a California DUI. One of the judge's biggest concerns is that the public is protected from a particular person.

So, a lot of times, what they will do is, as a condition of releasing somebody on their recognizance where they don't have to post bail in a misdemeanor bail, what the judges will do is they will tell the person that they've got to do one AA meeting per week while they're out on bail to remain on the bail they've posted or to remain out on their own recognizance.

I've even seen them say that they have to do a certain amount of AA meetings between the court date that the OR release is given and the next court date.  That can be as many as five per week.

So, they're trying to message the criminal defendant that drinking and driving are dangerous to themselves, that they could get in an accident and be killed. Still, it's also hazardous to the public in general.

They're going to make you think about what you're doing by making you go to these AA meetings. I see this a lot in cases where people get a misdemeanor DUI case.  They get sent to court.

That's also done in second and third-time DUIs.  Once again, the same rationale for the bail set is that this person is dangerous. They've got a second or third DUI, so we will have to do everything we possibly can to protect the public from that person.

Bail for Felony DUI in California

When you start to talk about felony cases and bail, you're talking about a situation where somebody has a first-time DUI that will automatically trigger a felony filing, or the person has a prior felony DUI and gets a new DUI. 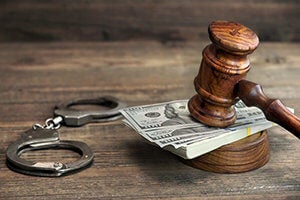 That will trigger a felony filing.  And finally, if the person gets into a bad accident and seriously injures another party or causes great bodily injury, that will start a felony filing.

Anytime you're talking about a felony filing, you can bet the judges will set bail, and they're going to put it as high as they justifiably can.

What they're going to be looking at in a felony DUI when setting bail is the person's criminal record.

Did they hurt anybody, what their blood alcohol was, how fast they were going — all of these factors will weigh in, and again they're going to be an eye on protecting the public?

The other thing that the courts look at is whether or not the person will show up in court.  That's another justification for making the person post the bail because they'll lose a bunch of money if they don't' show up.

I don't think that's prevalent in DUI cases because people will often show up.  They'll have a warrant issued for them which will eventually be executed.  They'd be arrested, and their home, at their work, be pulled over in their car.

Nobody wants to be looking over their shoulder related to a DUI matter.  So, usually, that's not the most significant reason that bail will be set in a DUI case at a high level.

It's mainly going to be because the person is a danger to society, a threat to the public, and the judge feels that bail should be set to protect the public.

As far as what that bail is going to be, there's something called a bail schedule in Los Angeles County, for example, where the judges have put the bail on every single crime, so your attorney should know or at least have a pretty good idea, what your bail is going to be set at.

If any, by what you're going to be charged with and what you've been arrested for. Then you can go in there anticipating whether or not they're going to try to make you post bail.

That's why it's crucial to get that first meeting with your attorney.  I meet with the client.  We go over what the charges are. We go over their criminal record, and then we'll have an idea about whether or not the prosecutors will attempt to make a person post bail.

Also, whether or not the judge will go along with that and then set bail because if they're going to do that, we're going to need to have a bail bondsman ready to go who can post the bail, so you don't go in custody for an extended period.

A lot of times in DUI cases where bails are going to be set, I can have a bail bondsman ready, and we can have the person released from the courtroom, so they don't end up having to be booked, processed, sent down to county jail and then they're going to be in there several hours.

Nobody wants to do that, and that's part of having a reasonable DUI defense attorney anticipating what's going to happen, taking the precautions, and making the right moves to get the right results.