Cycling Under the Influence

Being a bike rider myself, I'm always interested in how law enforcement officers enforce this law that says you cannot be under the influence of alcohol on a bicycle. Usually, it's them just harassing people, or if they see somebody acting crazy, they can use this law to arrest the person and book them for a misdemeanor.

I guess they don't put the same penalties because it's not quite as dangerous to other people.

It certainly could be dangerous to yourself if you're intoxicated with an alcohol driving on the city streets.  You could be run over by a car, but they're more concerned about you doing things that could impact other individuals of the public.

What Does Prosecutor Have to Prove To Convict for CUI?

What they have to prove to get you for cycling under the influence of alcohol is a misdemeanor if you're convicted of it, but it only carries a fine. 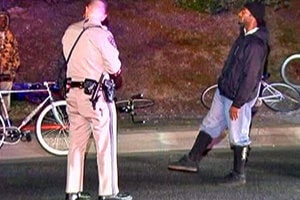 So, over the years, I have handled these bicycle cases where people are riding bicycles on the road intoxicated.

It usually has to do with some other crime, like the police seeing somebody and thinking they're suspicious.

They pull them over on their bicycles and determine they didn't do anything criminal.

They're not trying to burglarize any houses or do anything illegal. Because they pulled them over and because they don't like them — maybe the person complains about it — since they didn't have a right to stop them or pull them over, they give them a misdemeanor ticket for driving a bicycle under the influence of alcohol or some other drug and then the person has to go to court.

Mitigation To Avoid A Conviction

We've been pretty successful in getting these cases mitigated down.  You just don't want a conviction for a misdemeanor on your record, so there are other charges if you've done something wrong that we can utilize to get an infraction and just a small fine, and you don't get that criminal record.

On other occasions, sometimes the police illegally stop you.  It's just like you're walking.  They can't just stop you for any reason.

If they do, and they figure out that you're drunk, you may be in a good position to argue that that was an illegal stop, and therefore, you shouldn't be able to be convicted of anything.

The same argument applies in these cycling under the influence cases.  They can't just stop you for no reason.

So, they're going to stop you, check you out, look at your ID, ask you where you're going and what you're doing, and the next thing you know, you've either been cited or arrested for driving under the influence on a bicycle, and you have to deal with that case.

So, if you have one of these cases and you're in The Hedding Law Firm jurisdiction, pick up the phone.

Make the call.  We're more than happy to help you out.  We're all over Los Angeles dealing with these types of cases, and we've had a great deal of success.