Once you get a second-time DUI, the courts start to look at you differently, and really what you're talking about, they're looking at you from a dangerousness level, thinking that you are now proven already to have been convicted once. Now you have a new DUI, and then they start to think, what can we do to this person to make them stop drinking and driving?

How harshly can we punish them, so they realize that if they do this type of stuff, they will be punished severely? Really what they start thinking about on a second-time DUI, especially in Los Angeles County, is jail time.

That's probably the worse thing they can do to somebody.  Another thing they look at is taking away the person's ability to drink. So, during the probationary period, they'll add a condition that you cannot drink alcohol at all while you're on probation. So, you're looking at a much harsher penalty on a second-time DUI. 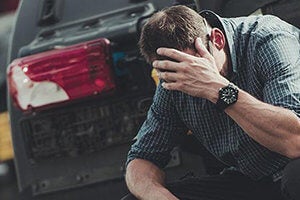 There's a minimum of four days in jail, up to a year in prison for a second time, versus that six months you were looking at on your first time DUI.

Also, if you're on probation for a second-time DUI, you're looking at getting punished for violating your probation for not obeying the law and picking up a new DUI.

So, under that circumstance, when you get a second-time DUI while you're on probation for the first-time DUI, you're looking at a year and a half in the county jail if you get convicted and are sentenced to the maximum possible sentence.

Many people don't like doing that eighteen-month alcohol program, but you have to do it because if you don't do it, you're then looking at never being able to get your driver's license back.

The DMV is very serious when it comes to a second-time DUI, and they will not let you have your driver's license back if you do not complete that eighteen-month program.  You can get it back after about six months on a limited basis for a second-time DUI.

This is a change from many years ago when you couldn't get it back until at least a year, so that's one of the few mitigating things they implemented on a second-time DUI that rarely happens.  The DUI laws seem to be getting stricter and stricter.

In addition to the fine and alcohol program. Often, they like to jack that probationary up to five years on a second offense instead of the usual three-year probationary period you get.

DUIs are treated very harshly in California.  For a second-time DUI under Vehicle Code 23152, California is probably one of the harsher states in the union as far as what they do. So, it's crucial to get in and talk with your attorney because there are things you can do. You could undoubtedly provide a defense for your case if your blood alcohol level were not a .08 or greater.

Also, to avoid all of the dire consequences that flow from a second-time DUI, you can get your case reduced down to a wet reckless, which will prevent the mandatory punishments that come along with a second-time DUI.

That's one way to void that jail time; the more extended probation, the longer the alcohol program.

Another thing that you should realize is that anything that happens in the criminal case regarding your second-time DUI, if you are convicted, it's going to be automatically sent to the DMV. Then they will treat you as though you are a second offense.

Also, the reverse of that is accurate, and that is even if you can beat the second-time DUI or get it reduced in a criminal court, you still may have some issues with the DMV because the DMV likely will say they don't care what happened in the criminal court.

They're going to deal with your license regardless of that, and if they find that your blood alcohol was a .08 or greater, there was a lawful arrest in your case. They will attempt to take your driver's license away or impact your driver's support for the next eighteen months on a second-time DUI in Los Angeles.

So, you can see with all of the different consequences associated with a second-time DUI that you want to get an attorney who has been down this road before, handled these DUIs in Los Angeles County before, and knows what it's going to take to either do damage control or to defend the case.