When it comes to alcohol-related offenses, one of the most significant ways that the police can justify a pull-over, a search, or a stop is if someone is foolish enough to — what we call is — “wave the flag.”

It's not just illegal to drink and drive but also to have an open container of alcohol in the vehicle—even if you're completely sober.

However, the penalties for carrying an open container are less severe, and this charge is preferred over a DUI conviction. In some cases, it may be possible to have your DUI charge reduced to an open container violation.

Probable Cause To Ask Questions

Often, that justifies them being able to ask everybody questions and search the car. Now you've got yourself in the wrong position because not only will the person drinking the alcohol get in trouble and be cited and given a ticket, but also the driver who was allowing somebody in their vehicle to drink alcohol will also be cited. They've got to go into court and deal with an open container ticket. 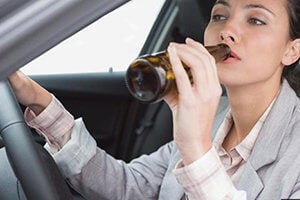 The biggest thing I see in this concept of an open container is helping the police search for other, more serious things.

For example, if they see an open container, they can pull the driver over and test that person for a DUI. A lot of times, the driver is getting arrested because everybody in the car was drinking, including the driver, and one of the passengers was foolish enough to make it clear that they were drinking alcohol in the vehicle, and that is usually the catalyst for the arrest of the driver in the car.

What I see a lot of times in these open container cases is that the person will spill the alcohol all over the inside of the vehicle to avoid detection by law enforcement once the car is pulled over.  This is not going to work.  The police are going to smell the carpet.

Suppose there are bottles of beer in the car. In that case, the police will still write the open container ticket if they can determine that the substances spilled on the vehicle's carpet were alcohol. They will give the driver an available container ticket, and they also will cite the passenger if they can identify somebody as holding a glass, a bottle, or a cup of alcohol.

But again, really, this is just helping the police pull over the car, check out to see if the driver has insurance, a valid driver's license, the car's properly registered, and a lot of times, they'll search the car, pull all the passengers out and look for drugs and weapons.

So, though it is a minor infraction, the open container can cause a big problem if the individuals inside the car are up to no good.

Open Container Violation is Better Than a DUI

You should hire an attorney if you've got an open container ticket because these tickets can often be squashed for infractions and non-crimes with a minimal fine.  Sometimes, you might even be able to get traffic to school if the matter is handled the right way.

If they find other things in addition to the open container and charge you with those things, if you've got passengers in the car, you may have an issue that somebody else has control over whatever they find in the car they're trying to use against you. You might also have a problem that it's an illegal stop and illegal search, depending on the circumstances of the case.

A criminal defense attorney who has handled those types of cases is in the best position to evaluate whether this whole open container situation gave rise to a lawful pullover, a lawful search, and a lawful arrest.  Those are all the things you're looking at whenever somebody gets in trouble, is arrested by police, and faces criminal charges.