I've been practicing DUI defense law now for 30 years.  I started off working for the District Attorney's office, then a superior court judge, and finally, I became a DUI defense attorney in the early 1990s, so I've seen everything. 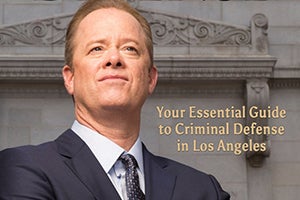 I know the ins and outs of California law and how DUI law has gone up and down, and of course, I realized that California is probably one of the strictest DUI states in America.

Los Angeles County has so many drivers. The prosecutors, judges, and legislature are very tough on DUIs because of all of the deaths that occur on LA streets every day, every month, and every year.

So, if you or a loved one is charged with a DUI, you'll need the best.  The way I look at it, especially for a first offense, is do it once, do it right and never do it again.

Make sure you hire an attorney who has experience in the local courts, knows both the judge's and prosecutor's tendencies, and knows how to fight a case and win it.

Negotiations with the Prosecutor

Many of these DUI cases can be fought because the prosecutors don't have the evidence.  The mistake you do not want to make, though, is to try to fight a DUI case that can't be won.

Because what will happen is you'll spend a lot of money, going through a lot of stress and pressure as the trial goes on. If you're going to lose, you're going to get a much worse punishment than if you were to resolve the case and let your attorney negotiate for you, get a mitigation package, talk about you as a person and get you the best possible resolution.

That's pretty much what I do.  If you've got a DUI case in Los Angeles and you're looking for the best, I have you come in, and we sit down under the cloak of the attorney/client privilege.

You give me all the details leaving nothing out relating to your case.  I can then give you a pretty good idea of what you're facing and the tendencies of the judge, the prosecutor, and the court you find yourself in.

I've been in all of the 48 courts in Los Angeles county.  They've now been trimmed up to somewhere between 25 and 30 because of budget issues.

So, for example, if you have a case in Beverly Hills that would usually go to Beverly Hills court, but they no longer do cases there, so your case will be sent to the Airport or LAX court.

Same for Malibu.  Those cases are sent to Van Nuys court of the Airport Court.  They're divided between the two, and the list goes on.

When you've been doing something for 30 years, you've fought cases, negotiated cases, know all of the prosecutors and judges, and learned how to handle DUIs just like yours. So, pick up the phone now.  Ask for a meeting with Ron Hedding.  Let us put our experience to work for you.

Let us put our reputation to work for you and our skill set, which makes us particularly helpful when figuring out whether you should fight your DUI case or whether it's the type of case that needs to be negotiated.

We'll sit down and go over everything, and when you leave my office, you will leave with a sense of relief because you know how we're going to handle your case.

You'll also have an idea of what you're up against, and you'll begin to take control of your situation because it's terrifying when you're arrested.

You're put in the back of a police vehicle and taken to the police station handcuffed.  The police are asking you questions.  You're either doing a blood or breath test.  You've got the DMV to contend with that can take your license away. Your freedom is on the line, so you're going to need the best.  Take it seriously.  Make the call now.