It's a common thing now where people booked and arrested for DUIs are also charged with evading cases. Often, people evade because they are intoxicated and don't want to get caught by the police because they know they will get arrested.

Also, to decide to evade the police, some of these individuals are intoxicated so high that they're not making the right decisions. In California, an evading arrest is defined under three different statutes:

I do a lot of cases in Los Angeles county where my clients are charged with both DUI and evading arrest (CALCRIM 2181).  One of the most significant factors on which of those charges will be more meaningful and how they will work together has to do with whether or not there's any injury.

If someone crashes or hurts another person — runs them over while they're evading the police while intoxicated — they're going to be charged with felony DUI.  They might even be charged with significant bodily injury in addition to that, and that starts to make the DUI possibly even more detrimental to them because of the three-year enhancement when you're talking about a DUI with significant bodily injury.

But if, on the other hand, it's just a regular DUI that the person has and they're evading the police, then that person is looking at much more of a problem as it relates to the evading because in Los Angeles county, if you're avoiding the police, they're usually looking at putting those type of individuals in prison.

So, if you're charged with a misdemeanor DUI and a felony evading, the evading is much more severe because you're facing prison time.  Whereas, when it comes to a misdemeanor DUI, the most time you can typically get, especially on a first offense, is six months.

Sometimes they can use some other Code sections to up it to a year. Still, a year in the county jail versus a long-time in an actual prison, obviously a vast prison, so then the DUI will typically take a back seat in the situation where the person is also charged with evading arrest.

Level of Danger in Evading Cases

This is because evading arrest ups the game as far as dangerousness, not only to the person but also to the public and the police.

I can't tell you how many cases I'm seeing now where people are evading the police, going fast and driving dangerously, and the police stop the pursuit. 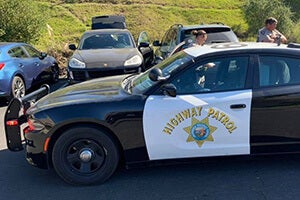 We're going to get sued by the victim's family, or the victim will sue the police if they survive because the police and the city are the deep pockets.  They're the ones that have big money.

So, they break off pursuits in these DUI evading cases in Los Angeles county.

They'll either try to get a helicopter involved or get the person's address and get them later.  They don't want to break the pursuit off, but if it becomes too dangerous, then a lot of times, the police will stop pursuing the person, and they will go and try to catch them later.

And they do a lot of times.  I've seen people in evading DUI situations, and they crash their car, run away, and the police eventually catch them at a different time because they're going to figure out who's car it was.

They will also figure out where that person lives and who's that person's family. They have teams of officers that go out and execute warrants on people who run away from the police, and they're able to identify and figure out exactly who those people are.

So, if you or a loved one is charged with DUI and evading at the same time in Los Angeles County and are looking for an attorney who's handled thousands of those cases.

You need a lawyer who has success, done damage control — and if it's a defensible case — obviously fought the case and defended it — you've landed on the right website here. Pick up the phone.  Make the call.  My name is Ron Hedding, and I've done thousands of cases over the last two years.

I've got over 400 reviews on the internet, and I have over 300 videos, so you can see some of the information I have regarding some crucial topics regarding DUI-related arrests and evading cases.