The field sobriety tests related to DUIs are very subjective things.  What I mean by that is that it's just the police putting people through a trial. They're sitting there watching it.

Often, unless they have a body cam on or their dashcam is pointing at the person while they're doing it — which they rarely do — it's just them looking at it, and they're determining whether or not they think the person passed the test.

Sometimes they actually will put in there that the person passed some of the tests, and obviously, that would be one way to challenge them and say, you told the person to count to thirty, and they were able to judge and relied on twenty-nine.  That's pretty good.  That sounds to me that they're cognizant, and they're good.  So, there are ways to challenge them.

The best way would be to have a videotape of whatever's going on.  That's one of the first things we do if we've got a close-call DUI and the person is claiming that they passed all of the field sobriety tests, and that means something in the case.

You know, if you blew a .16, forget it.  Who cares if you passed the field sobriety test because your blood alcohol level is double the legal limit. 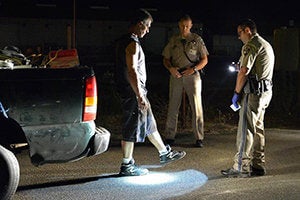 If, on the other hand, you were a .08 and they were refusing to give you something less than a DUI, then the field sobriety tests start to become important because you can then challenge the .08 and say that their breath machine is not 100% accurate.

You could have been a .06 based on the .02 error rate related to the machine.

So, if you've got a video of it and you look fine in it, then obviously that would be something that could be used to help you.

Another way to challenge them is if a dashcam video shows you getting out of the car and dealing with the police fine. You're walking fine — any of the stuff that could indicate that you're normal and don't have any problems would certainly be a way to challenge the field sobriety tests.

But the best DUI defense attorneys are asking questions about it and pointing things out and really evaluating what the police put in the police report related to those tests and then attacking and challenging the police's presumptions and what they're saying about the test and whether or not the person passed them or not.

So, you're going to have to look at the police report itself and see what the police put in there, and then you start to talk about it with your client.

Your client could undoubtedly get on the witness stand, challenge a field sobriety test, and say they passed those tests. They did everything they were supposed to.  Maybe they didn't stand on one leg properly because they had an injury on one of their legs.

The client could certainly testify to that.  They could bring medical documentation to support that.  That would be another way to challenge the test through other evidence and your client. So, all sorts of stuff can be done, but you don't do it in every case.

Your attorney will need to look at the police report and talk to you about it. Then they'll be in a position, based on their experience and what it says in the police report to decide whether or not they really can challenge the field sobriety tests and whether it will make a difference to you and your case.