Boating Under the Influence

Often, people don't realize that drinking alcohol and driving a boat can be a real big problem.

In California, the legal limit is the same for driving an automobile — a .08 or greater — if you're behind the wheel of a boat, and if the Coast Guard or Sheriff or anybody gets their hands on you, they're going to arrest you and charge you with a BUI – boating under the influence of alcohol – under California Harbors & Navigation Code 655.

They're usually dire implications because if you run somebody over and seriously injure them or kill them, you can be charged with assault with a deadly weapon and other crimes depending on how your behavior was out on the water.

A considerable percentage of boating accidents and fatalities are linked to alcohol.  In other words, when you're out there operating a motor vehicle, people are swimming. People are using other cars out there; you're in a position where having alcohol — which of course, affects your judgment and ability to be safe on the water — is going to be amplified with all that activity going on around you.

Probably even more so than with automobiles, which people are a little more used to dealing with without on the road even if they have alcohol. On the other hand, Boating is a different and obviously, more dangerous situation.

So, suppose you're in a position where you are arrested because you were behind the wheel of a boat, and you're charged with boating under the influence. In that case, you'll want to get an attorney who has handled these types of patients before and is familiar with them. Sometimes some different issues come up in these cases versus cases where automobiles are involved.

The penalties can typically be probation — usually, it's three-year probation — and then there's usually a $390.00 fine, plus a penalty assessment, so it's usually about $2,000.00. Then there are other penalties such as an alcohol program inflicted upon you by the prosecutor and the judge.

Legal To Drink Alcohol on a Boat If 21 Years Old

Another interesting point that comes up in these boating-related issues has to deal with whether you can even drink at all on a boat, and the answer is that you can sip on a ship.  You have to be at least twenty-one years old to do so legally. 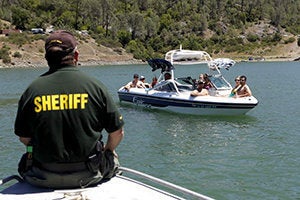 It certainly doesn't make any sense that just because you're on a boat, if you're under the age of twenty-one, somehow you're suddenly able to drink alcohol.

Passengers on the boat can drink, but if you're going to get behind the wheel at any time, or if you're in a position where the other party might want to get on ski, and you're going to pull them, then you don't want to drink because you can get caught drinking and driving.

One big thing that I've seen as a boater is that, especially during holidays, the sheriffs will put a boat in the water at busy locations, and they're looking for people drinking and driving.  They have binoculars.

It's usually a yellow sheriff's boat out in the water, but they can come in different crafts.  They just put their lights and sirens on it, and they can pull you over.

Another way, some of these bodies of water have local patrols, and they can come in and stop you.  They can call out the sheriffs to come and arrest you if they think that you're driving under the influence.

Usually, though, where I see people getting in trouble is driving under the influence and becoming involved in a boating accident.

That triggers law enforcement and the officials who are on a lake or body of water to come in, and now they're going to be looking at the cause of the accident.

Why did the boats crash?  Why did you run over that person who was in the water? Once they start to do that, they're going to look to see if you're drinking alcohol if you're under the influence, and they may get law enforcement involved if they're not law enforcement themselves.