Driving Under The Influence of Marijuana – California Vehicle Code 23152f

One big thing that I see happening as things shift in the law and it's a different time is that many people are getting arrested for marijuana DUI.

They don't even have any alcohol in their system. Because marijuana has now been legalized in California, people figure they can smoke and drive, and it won't matter.

Driving under the influence of drugs is covered under California Vehicle Code 23152f. They don't realize that the police are looking to arrest people smoking marijuana and driving who can't safely operate a motor vehicle. The prosecutors are also looking to prosecute people.

What they've done is they've tried to figure out a way so they can measure the person's THC level to see how much marijuana they've smoked to be able to combat the argument that people make.

THC stays in your system for a long time, so even though I have THC in my system, I'm not under the influence of marijuana, so you can't get me for a DUI.

Police Seeking Evidence of Marijuana Use During Traffic Stop

Of course, the prosecutors and law enforcement officers realize this argument.  They understand it all too well and know that people will make the argument.  So, the type of thing they're looking for when it comes to these marijuana DUIs is, does it smell that you've recently smoked marijuana. 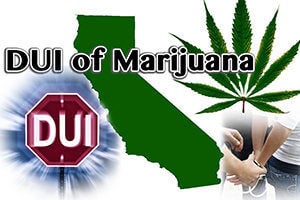 For example, if they're pulling you over in a car, they're going to smell the vehicle's inside.

They're going to check you as a person to see if they can see signs of an individual who has smoked marijuana, and then what they'll do — and this is where they have the most compelling evidence — is they will get a drug recognition police officer involved in the case.

And that individual will run you through many tests to determine whether or not you have, in fact, smoked marijuana and if you're still under the influence of marijuana. The key thing they're looking for in these marijuana DUIs is whether you can safely operate a motor vehicle.

They will do their best to try to figure out, number one, whether you're under the influence of marijuana versus just having it in your system because you smoked it in the past, and number two, they're going to be looking at what is this person's reaction time?  Could they drive a car safely?

They're doing that because they know in defense of a marijuana DUI, the defendant is going to hire an attorney, and that attorney is going to try to challenge the police about whether or not they've proven that the person can't safely operate a motor vehicle.

Because this is different than alcohol, where you have that presumption that if you're a .08 or greater, it's presumed that you can't safely operate a motor vehicle.   It's a little bit more complicated in marijuana.

They are starting to get more sophisticated in the tests to measure the level of THC in your system. I think that at some point, they're going to have to put a story about being similar to the .08 — what level would you have to be under the influence of marijuana to be determined to be driving under the influence for purposes of trying to convict you for a marijuana DUI.  So, that's coming down the pike.

Penalties for Marijuana DUI in California

If they feel you have an alcohol or a marijuana problem, they will use one of those programs depending on the circumstances.

So, different things can be done for these marijuana DUIs to punish you.  The prosecutors and judges see them the same as an alcohol DUI in that the person is under the influence of something, and they're a danger on the road. They need to protect the public from that particular individual.

It's interesting because it's not just marijuana that they are using to argue that the person can't safely operate a motor vehicle.  It's other drugs as well.

So, if you've got a DUI, your best bet is to find an attorney who has done these cases before in the jurisdiction where your case is pending and can get a game plan together for you pretty quickly to be successful.