How Do Prosecutors Prove a Marijuana DUI?

I see now more and more, with the legalization of marijuana, that police are pulling people over for marijuana-related DUIs at a record number.

The way they prove a marijuana DUI is first, obviously, by getting your blood so they can measure your THC level, and they can do that now, depending on what your THC level measures out at.

That will be one of the most significant factors in determining whether or not you can safely operate a motor vehicle.  That's a standard in a DUI – whether it involves alcohol, marijuana, or any other types of drugs. 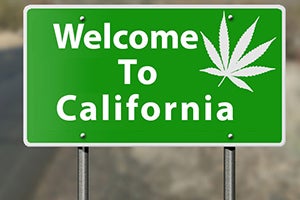 If you can't safely operate a motor vehicle and you're on some drug, they can get you for driving under the influence in Los Angeles, and I'm telling you right now, they will do it.

One thing I see happening as things change in the law and it's a different time is that many people are getting arrested for marijuana DUI. In many cases, they don't even have alcohol in their system. Since marijuana has been legalized in California, people figure they can smoke and drive, and it won't matter. They are wrong.

California Vehicle Code 23152(f) VC defines driving under the influence of drugs. Many people don't realize that the police are looking to arrest people smoking marijuana and driving who cannot safely operate a motor vehicle. The prosecutors are also looking to charge people with a marijuana DUI.

They have figured out a way to measure the person's THC level to see how much marijuana they've smoked to provide a legal argument to obtain a conviction.

THC stays in someone's system for a long time, so even though you may have THC in your system, it does not always mean you are under the influence of marijuana. Our Los Angeles DUI lawyer will review further below.

Seeking Evidence of Marijuana Use During a Traffic Stop

Prosecutors and law enforcement officers realize this argument that just because THC shows up in your system doesn't mean you are under the influence. They know that people will make the argument. 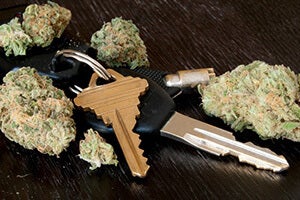 Thus, what they usually seek when it comes to a marijuana DUI is, does the evidence show that you recently smoked marijuana? For example, when the police pulled you over on a traffic stop, did they smell marijuana inside the car?

Law Enforcement will typically check you to see if they can see signs that you recently smoked marijuana.  They will often call in a drug-recognition police officer to get involved in the case.

These drug recognition experts (DRE) will run you through numerous tests to determine whether or not you have smoked marijuana and if you're still under the influence of it. They seek to prove in these marijuana DUIs whether you can safely operate a motor vehicle.

Thus, for the standard alcohol DUI, they have the field sobriety tests, but for marijuana, this is where this drug recognition will come in. A DRE will do their best to try and figure out:

They're doing this because they know the defense lawyer in a marijuana DUI will attempt to challenge the police about whether or not they've proven that the defendant could not safely operate a motor vehicle.

This factor is different than alcohol because you have a presumption that if you're a .08 or greater, it's presumed you can't safely operate a motor vehicle.  It's more complicated in marijuana DUI cases. Prosecutors are getting more sophisticated in the tests to measure the level of THC in your system.

People are arrested every single day for marijuana-related DUIs.  Another way they do it is they look at the surrounding circumstances.  For example, they're going to look at your driving.

If you were involved in an accident, that's certainly an indicator that you couldn't safely operate a motor vehicle – if you're swerving on the road, committing traffic violations – whatever the case may be. Driving is one factor that they are going to look at. 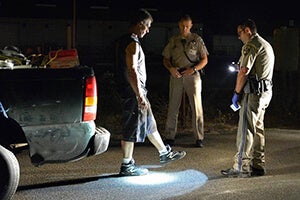 These are all ways to determine whether or not you could safely operate a motor vehicle.  That's the standard.

What is the Implied Consent Law?

There's something called the implied consent law which gives police the right if they think you're under the influence of something to test you, and you have to cooperate with them.

If you don't cooperate with them, it will go down as a refusal because if people say they're not going to cooperate, and that's the end, nobody would ever be able to be caught driving while under the influence.

To combat that, they basically say, look, if you want to have a driver's license, if you want to drive in California, and if you're going to drive in Los Angeles, if the police ask you to take a test to determine whether or not you can safely operate a motor vehicle, you've got to do it.

If you don't do it, they're just going to assume that you're driving under the influence, and we'll prosecute you accordingly.

So, pick up the phone if you or a loved one is charged with a marijuana-related DUI.  Ask for a meeting with Ron Hedding.  We will go over everything.

I will use my 30 years of defense experience to help you figure out the best course of action.  The Hedding Law Firm offers a free case review by phone or use the contact form.