Drinking in a motor vehicle is not as severe as a DUI in Los Angeles County but still carries consequences. The bottom line is that you're not permitted to drink in any motor vehicle on a highway.

The policy behind this is how DUI's happen – people messing around in vehicles, drinking alcohol – the next thing you know, somebody decides to drive. They're intoxicated, and they end up hurting somebody, killing somebody – and this is why we have the DUI laws in California and Los Angeles, and this is why you cannot drink alcohol in a vehicle.

This is California's open container law where people all the time are in cars thinking they can drink – and it's not just the driver that can't drink – passengers can't drink. The bottom is, the car doesn't even have to be moving. 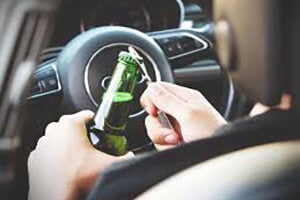 You can't drink in the car, so people that go into parking lots and drink they're going to drink alcohol then go into a club.

If they get caught by the police with alcohol in a vehicle, and it's an open container, and they're drinking there, they're going to get charged with Vehicle Code 23221, and they will be prosecuted.

This crime is not as severe as a DUI, but it still carries consequences. Nobody wants a conviction on their record.

Nobody wants a misdemeanor on their record, which is a crime. Nobody wants to be sent to court and have to deal with the prosecutors – especially if you have a criminal record or you have a prior DUI, and you get one of these open container cases – drinking alcohol in a vehicle – you're going to be looking at a probation violation.

This is the exact thing that the judge does not want people doing when it comes to being on DUI probation, and that is drinking in a vehicle, having an open container in a car. Also, the police don't mess around.

If there's an open container in a vehicle – even though the driver doesn't have it – they're going to probably cite the driver as well for driving somebody around who has an open alcoholic beverage in their vehicle.

One defense is that it is not alcohol. The police have to be able to prove that it's alcohol. Often, people spill out whatever alcohol they have when the police come up, and their open container and the police cannot prove that the person was drinking alcohol.

In other words, how do the police know just because somebody might be drinking something? How do they know that it's alcohol? So, it would probably have to be readily apparent to the police that someone had an open container that contained alcohol.

For example, they saw a beer bottle that they recognized as a significant brand beer, and the person was drinking it in the car, then they'd be able to get him.

Another defense would be that it's not an open container. You're allowed to buy alcohol and ship it to your house, or a party, or wherever you're going as long as it's not opened up. So, if it's sealed up and the police can't prove that you're drinking it at that time, then they are not going to be able to get you for an open container or drinking alcohol in a vehicle.

So, if you have one of these cases, you're going to want to sit down with a criminal defense attorney who does these cases, who knows how to handle DUI cases, open container cases and has dealt with them before, and knows what the precautions are and what can be proved and what can't be proved by the prosecutors.

Often, the police are overzealous, and many people don't like this because, in other countries, you can drink in public. Still, in Los Angeles, in California, you're not allowed to drink in public. Specially, you're not allowed to drink and be in a vehicle, because again, they're trying to guard against people drinking alcohol, getting behind the wheel, and causing some severe accident.

So, suppose you have a Vehicle Code 23221 charge – open container – whether you're a driver or a passenger in that vehicle, and you're appearing before one of the Los Angeles County courts. In that case, Los Angeles County courts, you're going to want to get an attorney like me who has dealt with these cases before. I have you come in. We go over everything.

We talk about the details, and we're going to look at the totality of the circumstances surrounding the open container case and see if there's some defense. If there is no defense, we're going to come up with a diversionary program – some infraction that's not a crime – so we can protect your record, freedom, rights, future, job, and all the things that are important to you. Make the call today, and I will help you with your open container or drinking alcohol in a vehicle case pending in Los Angeles County.