This is a small device used to detect whether or not somebody is under the influence of alcohol, and obviously, it's part of law enforcement's efforts to catch and convict people for DUI cases.

I've been doing this for twenty-five years, and for most of that time, that device had limited reliability, function, and admissibility in a criminal DUI prosecution.

However, today that device is used more and more, and prosecutors, with some success, are trying to get in the results from the PAS device against a defendant in a DUI prosecution.

One of the device's limitations is its accuracy. Of course, that's the essential thing in a DUI — which is having some device that can accurately measure a person's blood-alcohol level. 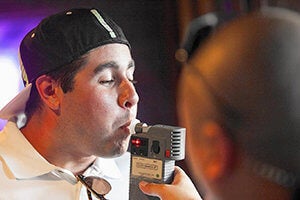 The problem with that device is that even the prosecutor's experts will have to testify that it has an error rate worse than the machine used at the police station.

So, the police pull somebody over and use the PAS device to make sure whether they're going to waste a trip to the police station.  They use that device to see how high the blood alcohol level is.

If it's a .08 or greater or anywhere near there, they're going to arrest the person, take them in and then put them in front of the big breath machine, which is more accurate.

Like in Ventura County, some law enforcement agencies have a machine they use in their car, which is pretty clever.

This is because then they get the blood alcohol much closer to the time of driving which is a stronger argument for them if the case were to be set for trial and the defense attorney were to challenge the expert and say you're getting a breath or blood reading hours after they pull over.

How can you figure out the person's blood-alcohol level when driving?

Who cares what the blood alcohol level was when you got the blood back into the police station or hours later? We want to know what it was at the time of driving, and that's a pretty compelling argument, especially if you can get some expert testimony behind it.

Challenge BAC at The Time of Driving

But this whole PAS device, now the prosecutors are trying to use the result to convict a person for a DUI, and it's one of those games where if you blow high on the PAS device and the prosecutors say, your client blew high at the time of driving.

Suppose you blow low on the PAS device and blow higher on the machine. In that case, the defense attorney says, the person was more down at the time of the driver, so it's a game back and forth between the prosecutor and the defense because a lot of times in DUI cases, law enforcement is using the PAS device, and you've got to four readings.

You've got two readings from out in the field on the PAS device, and then you have the two reasons in the police station.

So, if all four of those are the same, the prosecutors start to have a pretty strong argument that whatever that number is, that's what your client was, and they have their experts use the results from the PAS device, the results from the breath test.  Also, if the person takes blood, they will use that.

So, when you're evaluating whether you can attack this device, you certainly can. Still, the device alone will not determine whether or not somebody gets convicted of a DUI.

The device, combined with other factors, will be the final answer.  In other words, how was the person driving?  Did the person get in an accident?

Why were they pulled over?  How did they do on the field sobriety tests?  Do they have a prior criminal record for DUIs?  How high was their breath result at or near the time of driving?

So, as you can see, a whole host of factors will play into whether or not somebody gets convicted of a DUI. But, indeed, understanding how the PAS device works and your defense attorney doing everything they can to use that result to your advantage makes sense in a DUI case.