This is one of the big requests many clients have — they want a wet recklessness instead of a first-time DUI. The difference between the two is not that significant.  A wet reckless is driving recklessly on the road, and you have alcohol in your system.

Whereas in a DUI, you're driving in an unsafe manner, you can't safely operate your motor vehicle, and you have alcohol, some drug, or both in your system.

Wet reckless is charged under California Vehicle Code 23103.5. It's not an offense you can be charged with at the time of arrest but is only used when the prosecution agrees to reduce a DUI charge. It's a type of plea bargain, a deal where you agree to a less severe offense than the one you were initially charged with.

Meaning, were you to get wet reckless and then within ten years of that wet reckless, you picked up another DUI or wet reckless, it would be a second-time DUI, and you would be treated as your first DUI was — as a full-fledged DUI.

Usually, with a wet recklessness, the purpose is less.  The fine is not as high.  The probation sometimes can be a couple of years instead of three years, and obviously, it's not as bad of a stigma on your record as a full-fledged first-time DUI. 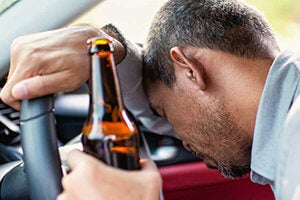 So, if you had your choice between a DUI and a wet reckless, you would choose the wet reckless.  But again, the difference is not that significant in the big scheme of things.

Your blood alcohol level will be pretty low to get a wet reckless in Los Angeles county.  In other words, if you blew double the legal limit, you have a minimal chance of getting wet recklessly.

If, on the other hand, you blew a .10, .09, .11, and your driving wasn't that bad, and you did pretty well on the field sobriety test,  then you have a pretty strong chance on your first-time DUI to get a wet reckless.

Of course, the prosecutors are going to see your prior criminal record. They're going to try to use that against you when it comes to sentencing you and how they deal with you, but if you can get a wet reckless. You've had prior DUIs; you're in a much stronger position to avoid some of the mandatory minimum sentences that the legislature has set up when you get multiple DUIs.

Mothers Against Drunk Driving, of course, is involved, especially in Los Angeles, California, when it comes to DUIs and a wet reckless.

So, if you're looking to get a wet reckless because you believe that the prosecutors have pretty good evidence against you for a DUI but you don't want that DUI conviction, obviously you're going to want to find an attorney who knows how to negotiate a plea bargain, and has been successful in getting a wet reckless and knows what the factors are to get that charge — to get that conviction versus a first-time, second-time, third-time or fourth-time DUI charge.

I've been doing this for twenty-five years.  I've had a lot of success in mitigating or lessening charges related to a DUI. If you need help, pick up the phone and make the call.  I'm happy to get you out of the criminal justice system as fast as possible.