Probable Cause Defense Strategy in a DUI Case

Because if the police are just willy-nilly pulling people over because they think they must somehow be involved with some illegal activity, even though they don't have any proof they did anything wrong to pull them over, this would be a good defense in a DUI case.

The way it would work would be to say, why did you pull that person over?  Well, they looked suspicious.

That's not going to be good enough.  They're going to have to pull them over for some traffic violation. Still, when we get the dashcam from their police cruiser, it shows there wasn't a traffic violation, and they're just pulling people over randomly for no reason.

Police Must Have a Valid Reason To Pull You Over

In that scenario, where you get lucky enough to catch them in a lie like that and get in big trouble for that, you would also argue that because of the illegal pullover, anything that flowed from that pullover cannot be used against my client. 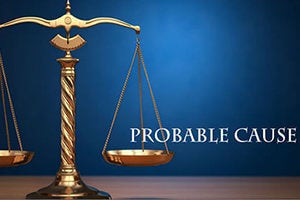 An example would be any statement my client made.  My client's breath if you took a break sample after that illegal pullover.  They made my client do the field sobriety tests after the illegal pullover couldn't be used.

Now you get yourself in the position where you've got a pretty darn strong argument that they don't have any more evidence left to use against you because it's all been suppressed by the judge as to the fruit of the poisonous stop.

So, that initial stop is where this probable cause defense comes in.  They must have probable cause that some criminal activity is afoot to stop you, or they have to have some traffic violation. If they don't have that, they get into a real problem and can win the case based on that.

What is Probable Cause for a DUI Arrest?

Also, they have to have probable cause to give you more than just a traffic ticket.  In other words, let's say they pull you over because you're swerving or pulling you over. After all, you're speeding.  Alright, give you a ticket and let you go.

They can order you out of the car.  They can start to perform field sobriety tests on you and try to get you for a DUI.  But, they need those specific things.

They can't just pull you over for a traffic stop and then try to parlay every traffic stop into a DUI, which they do. Because they'll ask you, have you had anything to drink?  If you say yeah, I've had something to drink.  That's it; it's on.  They got you.

If you're slurring your speech and can't talk, you swerve all over the road dangerously; that might be enough to give them probable cause to stop you, get you out of the car, and make sure that you're safe to be on the highways.

Part of being a California driver is you give up certain rights.  Driving from the DMV's perspective, from the legislature's perspective, is a privilege and not a right, and part of that privilege is what's called the implied consent law, where you agree that if the police think you might be under the influence of alcohol or drugs or a combination of both, you've got to cooperate with them.