When it comes to DUIs and traffic violations, this is kind of the bread and butter that the police use to pull people over.

They need to allege some traffic violation to pull somebody over, and you see the police out late at night, especially on the weekends and even weeknights.

They are even out in the wee hours of the morning, believe it or not — people are going to work after they drank the night before, a lot of times, they still have alcohol in their system, and the police are on the lookout for that.

Police Use a Traffic Violation For DUI Investigation

So, they're looking for some traffic violation to use as an angle to pull you over and do their DUI investigation.

When they come upon your car, and you roll down your window, and you've had drinks either recently or the night before, believe it or not, they're stone-cold sober, and a lot of time, as that window opens up, they get a blast smell of alcohol and then their investigation is on.

Especially the California Highway Patrol.  That's all these guys do is investigate DUI cases.  They get medals and awards from Mothers Against Drunk Driving and their department for how many arrests they can get for DUIs.

So, when they're out on the road, they're looking to pull people over, and they will pull them over for any reason.

Probably the most straightforward reason they use is that the person was weaving or swerving, and then they'll use that as a justification to pull the person over to smell their breath and ask them if they've been drinking.

That's their second move. In addition to trying to smell alcohol, they just point-blank ask the person whether or not they've been drinking, and a lot of people are honest and say yeah, I had a couple. The next thing you know, they're getting him out of the car and having him perform the field sobriety tests.

Some Traffic Violations Can Enhance a Sentence

Another interesting thing about traffic violations related to DUIs or driving under the influence cases is that they can exacerbate a DUI.

In other words, they can make it worse if, for example, you were going way over the speed limit. The police put that in the police report — 80mph, 90mph, 100mph — once the prosecutors see that combined with the fact that you're driving under the influence, they consider you a much more dangerous individual and a candidate for jail tie. 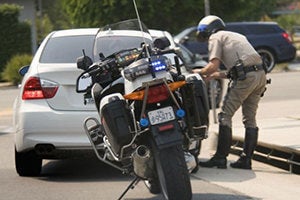 So, these traffic violations can be used to enhance a sentence.  If someone's driving recklessly and they're also DUI, that's another significant factor that the prosecutors will consider in filing additional charges.

So, if you have traffic violations and you have them combined with a DUI, you can expect that they will treat you much more harshly than they would somebody who simply has a DUI.

Maybe they were driving without their lights on, for example.  The more traffic violations the police observe and put in the police report, the more serious the prosecutors will consider the case. If charged with DUI, it might be possible to reduce the charge to a traffic violation.

Lawyer To Reduce a DUI to a Traffic Violation

It should be noted that prosecutors want to get a conviction in every DUI case, but it's not always realistic. In some cases, they have problems with the evidence and arrest process, raising questions about convicting. In this type of situation, the prosecutor could offer a plea bargain.

They are willing to drop the DUI charge if you agree to plead guilty to a less severe charge.

Most plea bargains don't involve traffic violations but rather a wet reckless deal. However, in a DUI case where a conviction is not likely, the prosecutor might offer traffic infractions instead, essentially a ticket. This is most likely the best type of DUI deal you could ever expect.

Another exciting thing is that the police will claim they see multiple traffic violations, arrest the person, book them for a DUI, and then the prosecutors only file the DUI charge. I have clients asking me why didn't they point out the other charges?

So, traffic violations are something you don't want to see attached to a DUI charge because they mean to the prosecutors that you're more dangerous than the average DUI offender who is arrested and prosecuted.