Many police encounters with individuals have to do with them drinking alcohol in a vehicle.  Often, people will park in a dark parking lot or on the street and sit and drink alcohol in their car with friends.

This is just an excuse for the police to come along and come up to the car, shine their flashlights in, get everybody out of the vehicle, search everybody and search the car.  This happens all the time, especially in parks.

You think you're going to stop in a park and sit there, especially on a weekend night. You can expect there's a good chance the police will come swooping into the garden to see if they can arrest somebody, especially for a DUI.  That's what they do.

Consuming alcohol in a vehicle is an infraction under California Vehicle Code 23221. This statute makes it illegal for drivers and passengers to have an open alcoholic beverage while in a car. It does not matter whether they are drunk or not.

Manufacturing Probable Cause To Search Vehicle

They try and manufacture probable cause to get into the vehicle and search it, so people will often be in a park after park hours. 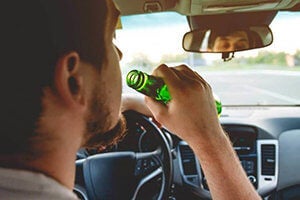 This is what these guys are looking for.  So, when you park in a public park, incredibly late at night and especially after park hours, you're just giving the police an open-ended invitation to come in and search you and your car and try to provide you with a citation or even arrest you.

So, it's not a good idea to drink alcohol inside of a vehicle because not only can you get charged with possession of an open container, the driver can be charged with some driving-related offenses that can mess with their driver's license and cause them to pay heavy fines, cause them to have to go into criminal court, potentially get a misdemeanor on their record.

And again, it's just a prelude to the police being able to search them.

I'm always amazed that people are driving around with drugs in their car or with a weapon, and they either don't have a front license plate on their vehicle or drive recklessly because they're stopped at a park late at night drinking alcohol.

Can I Plea Bargain My DUI Down to Drinking in Vehicle?

It's possible, but it will depend on the details of the case. A wet reckless is a more reasonable offer. Drinking in a vehicle makes it easy for the police to find them, search them, and locate the weapon.  Now they're in a whole world of hurt, especially in Los Angeles County, because after you get caught drinking in a vehicle and find a weapon, you now put yourself in the wrong position.

So, the short answer related to drinking alcohol in a vehicle is, don't do it.  Could you not get caught doing it?  If you did get caught doing it, pick up the phone.  Make the call.  I've handled thousands of these cases over twenty-five years.

We have to try to show that it's not the typical circumstance, whatever your case is.  It's an aberration. It's never going to happen again, so we can try to avoid that criminal conviction and possibly use some defense-related to an illegal stop/search of you and your vehicle to get you the best outcome in your criminal matter.