Once you get into this area where you're being charged with a fourth-time DUI you've got some real problems and you're going to need a criminal defense attorney who has a lot of experience with fourth-time a DUI.

For one thing, you're looking at prison time and the prosecutors are usually trying to give the longest possible prison sentence they can give.  They're looking to do that because it's a deterrent and it also shows that they're actually taking your situation seriously and not just sweeping it under the rug, because to get that fourth-time DUI obviously you had to go through three other DUIs — typically, not always.

Sometimes you can get a felony DUI for another reason, but if it really is your fourth-time DUI, then you are in a position where you're looking at a significant amount of time in custody unless somehow your attorney can show that the fourth-time DUI is an aberration.

In other words, you actually were doing well and something happened to knock you off course.  Really, one of the biggest things that prosecutors or judges are looking at when they deal with a fourth-time DUI is how dangerous you were out on the road and what they believe they could do to protect the public from those individuals who drink and drive and who will not stop doing that.

Punishment wise, you're definitely looking at prison time unless your attorney can somehow convince the prosecutor that probation is the better option for you.  Another option sometimes is to do a long-term live-in residential treatment program. 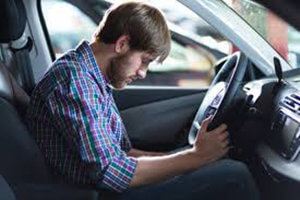 Sometimes that can help avoid a lengthy custody sentence because the prosecutors figure that if you're off the road for a long period of time and you're getting help for the root problem, then they feel like they're doing something that can actually assist you in relation to your DUI situation.

So, that's definitely one option, but that of course, comes with not being able to work for six months to a year because you're in a long-term residential program and a lot of people really don't want to do that, can't afford to do that — have a family and a number of other obligations.

I think what it really takes is getting serious about not drinking anymore because that seems to be the root of the problem once you're getting behind the wheel for a fourth-time and getting a felony DUI.  That's another issue that the a first DUI — as long as you didn't hurt anybody — you're going to be charged as a misdemeanor, whereas now this fourth-time DUI will be charged as a felony, so you're going to lose a lot of rights.

You'll lose the right to vote.  You'll lose the right to own, use or possess a weapon and you're going to have a felony on your record for at least a period of time.  If you end up going to prison or getting a prison sentence then that felony will be on your record forever.  If you get a probation sentence then you would have a chance to get the felony reduced down to a misdemeanor.

Other penalties related to a fourth-time DUI are very similar to other DUI's in that you have to do an alcohol program and the DMV is going to respond to you.  A lot of times the DMV will just simply revoke your driver's license for a period of three years depending on what your driving record looks like and what you end up actually getting convicted for related to your DUI matter.

So, your best course of action typically is to find an attorney who knows the courthouse where your case is pending and obviously is familiar with how to successfully defend a DUI, and success at this level means trying to keep somebody from getting a prison sentence where they lose a lot of their substantial rights because if you get a prison sentence then you're going to put yourself in a position where you're locked up for a lengthy period of time and your record is marred for a lengthy period of time.

What occurred in the prior DUI's — whether you injured anybody in the prior DUI's and obviously, they're going to look at you as a person.  Meaning, you as an individual who picked up a DUI and what exactly you did during that DUI.

Planning a Strategy for Best Outcome on Fourth DUI

So really, I think it's important right from the beginning, when you're talking about a fourth-time DUI, you've got to start to figure out what the plan of attack is going to be.  In other words, what strategy is going to be utilized to get you the best possible result for your DUI case?

Is it going to be a strategy where you're trying to defend the case or is that not possible because they have the evidence against you?  If they've got the evidence, obviously you're going to want to make sure that you acknowledge that you've done something wrong.

Then, you and your attorney are going to want to show the prosecutor and judge what you're going to do moving forward so that you put yourself in the best position not to get behind the wheel with alcohol or drugs or a combination of both in the future.

If you can show the judge and the prosecutor this, then you've put yourself in the best position to be successful and to get out of the judicial system as fast as possible.