People don't realize all of the bells and whistles that the prosecutors, legislature, the police, and judges are ready to hit you with if you are driving under the influence of alcohol or drugs or any other substance that affects your ability to operate a motor vehicle safely.

They've got all sorts of good stuff in California, and I say that sarcastically ready for you, and the latest one — and they're using it as a very vicious weapon — is great bodily injury.

So, if you're driving along and over the legal limit, you've got drugs in your system, and you get in an accident. They determine that you couldn't safely operate a motor vehicle because of your impairment, and somebody gets seriously injured.

For example, they get hurt so badly that the prosecutors claim they have a great bodily injury — like a broken leg. There's a slew of scenarios where somebody could have a significant bodily injury (CALCRIM 3160), and I find myself arguing this.

Sometimes people are just trying to dummy up a personal injury case, claiming they're hurt.  They get an attorney, and now they're trying to contact you for a great bodily injury allegation.

Unfortunately, the prosecutors sometimes can't read between the lines and see that the person is not hurt.

Regardless, you're charged with great bodily injury.  What does that do, and how do you get out of it?  How do you avoid that allegation? 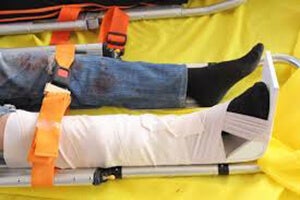 Great bodily injury is an enhancement under California Penal Code 12022.7.  It's not a charge.

You're going to be charged with a felony DUI.  They're going to allege great bodily injury, and now here's what you're looking at.

You're looking at an extra three years in prison at 85% tacked on the back of whatever sentence you get.

So, if you get three years, for example, for the DUI, you could get another three years for the great bodily injury allegation.  Now you have six years.

You have to serve the six years at 85%, and any crime that has a GBI allegation attached to it that you admit is a strike.

So, now you have a strike on your record in California for the rest of your life if you have to admit that enhancement.

Now you start to get a sense of what they're going through with these DUI cases.  This is only one tiny example, but it turns out to be a great example because that gives the prosecutors a lot of bargaining room.

So, when they file the case and charge you with great bodily injury, you're now looking at many years in prison, a strike, etc. Now you're going to be a lot more reasonable when negotiating because you want to get the lightest possible sentence.

Also, they get their strike; they get 85% of whatever they have you serve — whether county jail time or prison time — but they strike the three-year punishment; they're allowed to do that. So, you still end up with a strike because you admitted the great bodily injury allegation related to a DUI case in Los Angeles, but now you don't have to serve that three years in prison.

Hopefully, your attorney can negotiate something for you that keeps you in custody for a very minimal time, especially with the coronavirus, the overcrowding, and the danger that's always been attendant anytime you go into county jail or prison.

So, what we need to look at is how do we convince the prosecutor to either get rid of the extraordinary bodily injury allegation altogether — which I've been able to do in some cases or at least strike that three-year punishment — especially if you're suitable for the DUI.

So, they're going to say, okay, this guy was a regular guy, or this woman was an ordinary woman beforehand, and they made a mistake with a horrible result. We're not going to kill them here.  We're going to punish them accordingly.

We're going to put a mark on their record but do we need to put them in prison that long?  That's an argument that can be made for most people who get first-time DUIs and happen to cause much damage.

But once you start getting into a realm of having prior DUIs, you've been warned before, you've been punished before, and now here you are again, now the prosecutors and the judge start to take the position they're going to take it out of your hide.

They will teach you a lesson and use the legislature's weapons-related to DUIs in California.  So, in my opinion, if you have any chance, this is just my opinion. I've been doing this for 26 years — if you want to have an opportunity to be in the best position to either fight the case — this isn't significant bodily injury — the person's not hurt that bad — if it makes sense in your case — or yes, the person is injured badly, but I had insurance.  I'm going to take care of him.

Pick up the phone.  Make the call.  If it's you or your loved one, I'm easy to talk to.  We'll either talk over the phone and get it set up or talk in person, whatever needs to be done to contact you or your loved one on the road to getting out of custody and resulting in the matter as quickly and effectively as possible.