When it comes to DUI, it's fair to say that not all DUIs are treated the same.  There are so many different factors that go into what could happen to you.  Of course, jurisdiction is essential.  Are you a case in a courthouse that is very tough on DUIs or in a more reasonable courthouse on a DUI case?

That's the first starting point, and that's something you're going to discuss with your DUI defense attorney. To see what things you might be able to do to swing the factors in your favor, like getting character letters and showing that you have a good driving record, a valid license, and insurance.

But really, the main factors that will drive what's going to happen in a DUI case and what can complicate a DUI case are things that you allegedly do that are dangerous. For example, you are driving very fast while under the influence of alcohol.  This is very dangerous.  Another person could get killed, and that's one of the biggest things that the prosecutors and judges are worried about — you hurting or killing another person on the road.

That's why they give you that Watson warning.  Every time you plead guilty to a DUI, they tell you that this is your warning.  If you drink and drive and kill somebody, you could be charged with murder. 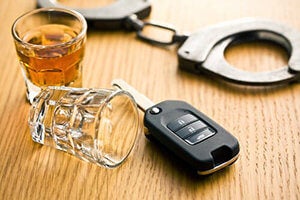 California is probably one of the strictest DUI states in the nation, so you have to be wary about what could happen to you and start to take preventative moves.

Now you've got into an accident.  Often, if you get in an accident with another person, that person may be hurt, and now the prosecutors will be looking to punish you.

If the injury is just soft tissue, you might get lucky and still maintain a misdemeanor DUI and not face state prison or jail time.  If somebody gets seriously hurt, you're going to face a felony and usually at least 90 days in custody.

Even if you get probation, you can be facing up to a year in jail.  You could potentially even be facing prison.  If it's a severe injury in a DUI case, such as significant bodily injury, that's a three-year enhancement. This means you get three years tacked on to whatever you get for the DUI, plus you get a felony.

Plus, it's a strike on your record.  So, these are the serious, complicated factors that you want to avoid, and that is, seriously hurting somebody in a DUI accident.  So, those are probably the three main complicating factors –speed, hurting somebody seriously, high blood alcohol level.

No Insurance in a DUI Case

But other factors can come into play depending on what has happened in your case.  For example, if you get in an accident — even if it's a property damage accident. But, you don't have insurance combined with your DUI case; now you have to pay these people back. The criminal court will try to make you pay these people around, and if you don't have the money to pay the people back, the prosecutors will attempt to take it out of your hide in jail time.

So, these are the most significant complicating factors that I see in California DUI cases.  But of course, you really can't generalize.  You have to look at your particular case and circumstances.

When you hire a DUI defense attorney, you want somebody to do damage control to mitigate these complicated factors to end up with the best result — not go to jail, not go to prison, not lose your license. That's another complicating factor — if you have multiple DUIs or numerous issues and driving infractions and now you pick up a DUI, you're in jeopardy of losing your driver's license with the DMV.

You want to get an attorney familiar with the DMV and know the best way to minimize the damage to your driver's license and your criminal record.