When it comes to DUIs, probably the worst situation people face is involved in an accident. So many different things are triggered if you're driving under the influence of alcohol or using narcotics, or just driving around dangerously, and an accident occurs.

California Vehicle Code 23153 VC defines the crime of DUI causing injury. Because now you have to pay the property damage for the people whose car you hit or the person whose car you hit.  Of course, you have to have insurance, or that's additional criminal charges that will be filed against you.

Also, nine times out of 10, if you get in an accident and you DUI, the other party will claim that they're injured, and now you're looking at a felony DUI and other enhancements that might apply to your situation.

If somebody dies, you're now looking at a potential murder charge.  So, you start to feel that accidents and DUIs are a terrible combination. 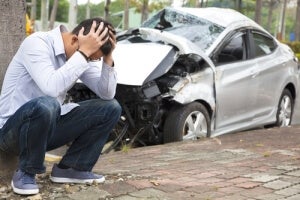 There are those circumstances where even though somebody got in a DUI accident, somebody doesn't claim that they're injured.  Maybe there's property damage.

Maybe you hit a parked car or some other object.  That's not the dire situation that we're talking about related to DUIs. It's not good, but it doesn't put you in a position where:

So, if you were involved in a DUI and an accident occurred, you want to get to an attorney right away.  I've been handling these types of cases now for almost 30 years in Los Angeles County, San Fernando Valley, Orange County, Santa Barbara County, San Bernardino, and Riverside.

All over California, when people get involved in accidents and get hurt, they must get to the best attorney they can find because of the ramifications of these DUI accidents in Los Angeles county.

You're probably the biggest problem with accidents related to DUIs is individuals who get hurt, whether it's a soft tissue injury, whether it's a severe bodily injury, or whether there's no injury at all.

That injury causes the issue because the prosecutors will seek to get the victim compensated for the damage. They're going to strive to punish you for causing an injury to another person.

That's where the rub is in these DUI cases that involve an accident. The critical thing to do is find the best defense attorney you can and let that attorney guide you through dealing with the situation where an accident or an injury occurs related to a DUI.

Because sometimes, unfortunately, you can be taken advantage of in these circumstances, and you could be facing jail time, a felony — things that can destroy your life.

Other times, they're just basically going too far.  In other words, they're trying to take advantage of the situation.

While they try to take advantage and get a personal injury lawyer and say they're hurt and do a host of other things, they do not realize the damage that could also cause you criminally.

So, you need somebody to protect you.  You've come to the right place.  Pick up the phone.  Take the first step right now.

Call and ask for a meeting with Ron Hedding.  If you want the best to take care of this mess, you've come to the right place.  Make the call.