Prohibits Having an Open Container of Alcohol in Your Car

Believe it or not, it is illegal to have an open container of alcohol in a motor vehicle in Los Angeles, California. The police and legislature are trying to stop people drinking alcohol while in a car.

This falls under the gambit of driving under the influence, but we see a lot of cases where passengers are drinking alcohol.  Police see them.  They try to hide the bottle.  They try to conceal a cup or a can, whatever the case may be.

The police come up and find the open bottle of alcohol.  Maybe the bottle half drinks, or maybe there's just a sip taken out of it.  Believe it or not, they can charge a Vehicle Code Section 23222(a), which is the open container section, even if the whole bottle or can of alcohol is consumed.

Because many people will drink the whole thing when they see the police or pour it on the carpet of the car's interior.

So, to prevent this type of activity, being able to stop somebody from being charged with an open container, the law allows it even if there's nothing in the bottle. 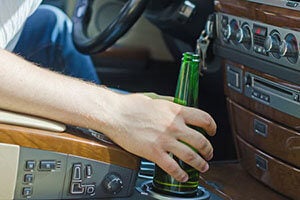 Technically, that would be the possession of an open container. Now, there are exceptions to this.

That would likely be a lawful scenario.  Also, if you're in a limousine, there's an exception for that — if you have a car for hire and you're drinking in there.

It seems to say that you could drink in a taxi, but this is a much more murky area of the law and a much more dangerous area of the law.  The bottom line is that you want to be in a situation where you're in a limo to have a good argument that you're not violating the open container law.

Under Age of 21 with Open Container

If you're under the age of 21 and you get caught with an open container, it's much more severe because you can lose your driver's license even if you're not the one driving.

So, this open container law is meant to punish both passengers and drivers of vehicles who are consuming alcohol.  It has to do with controlling driving under the influence because if people could have alcohol accessible to them while in a car, this would tempt them to drink alcohol and drive. It's very unsafe on the streets, and this is what the legislature is trying to look out for.

So, if you've got an open container case and think you might have a defense to it, your best bet is to sit down with somebody like me who's been doing these types of cases — Vehicle Code Violations/DUI now for over 25 years.

I know all of the ins and outs.  I know when the police have the goods on you, and I know when they don't have the goods on you.  If it's a murky gray area, we will figure out what we can do to mitigate, do damage control, and protect your criminal record. Nobody wants to have anything on their record, especially for something small as driving around with an open container.

Open Container Creates Probable Cause for Police to Stop Vehicle

Usually, what this open container does for law enforcement is it gives them the ability to stop cars.  So, people are drinking and driving on a card; they do what we call “wave the flag” when the police see them with alcohol.  They quickly hide it.

That justifies them stopping the car.  So, that's another reason not to drink alcohol inside a vehicle.  People will go into a park, on the side of a street, in a dark area, and drink alcohol.  This again gives the police an excuse to come up, shine their flashlight, and search the vehicle.

So, this is an excellent little weapon for the police to find other crimes. One good thing is, believe it or not, in a private location,  like a private parking lot or a dirt road that's not a public road, you might have the argument that you can have an open container in that scenario versus being on a public highway.

You definitely cannot have an open container on a public road. So, if you have one of these situations, pick up the phone.  Make the call, and we'll do everything we can to help you.