Possession of Alcohol in a Vehicle by Someone Under 21

This is a crime that is prosecuted quite often, and not just the person who has the alcohol who is under the age of 21 will get charged. It's defined under California Vehicle Code 23224. See related possession of alcoholic beverages by someone under 21  described in CALCRIM 2960. Also related is the open container law in California under Vehicle Code 23222(a).

Often, the driver of the vehicle will be prosecuted as well for an open container.  So, it has a broad sweeping effect. Police will swoop up on people drinking at the party, for example, make everybody get out of the car and search everybody.

Then when they find alcohol, they will issue a citation to the driver.  They'll give a source to the alcohol person and investigate an underage DUI charge.

Probably the most significant implication if you're under the age of 21 and you get a citation for drinking in a vehicle is that you'll probably end up not getting your driver's license if you don't have one for some time.

If you do have a driver's license, there's a good chance that your driver's license will end up being suspended, and you will have to wait six months to a year to be able to drive. 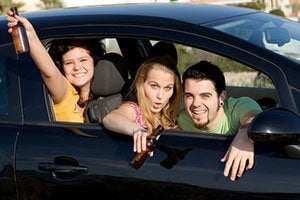 Many times in Los Angeles County, for these cases where minors are drinking in a vehicle, the individual will be sent to one of the juvenile courts.

Now, many times we're seeing, especially in Los Angeles, the probation department dealing with these cases.

They will put people through programs, suspending people's licenses and giving them a hard time driving since they know that most of the accidents are caused by minors. This is especially true for minors drinking alcohol when they're not 21 yet.

Those minors also tend to drink alcohol and drive, and people end up getting killed or injured or in an accident or getting some traffic violation. So, suppose you have a son or a daughter charged with either an open container or possessing alcohol in a vehicle under the age of 21. In that case, if they have any court proceeding where they're entitled to an attorney, my suggestion is you get the attorney.

Penalties for Possession of Alcohol In-Vehicle Under 21 Years Old

I've represented a lot of minors.  I've been able to get people a pretty good resolution where they don't lose their license under the right circumstance.

If you have a minor under the age of 21 who is driving a vehicle and drinking, that little is likely to lose their driver's license for a year with no restriction.

But sometimes, depending on how high the blood alcohol level is, we can avoid a criminal charge against that particular minor which is significant because nobody wants to get a mark on their record, especially one involving alcohol.

Defenses for Under 21 Alcohol in Vehicle Charges

So, if your child has been caught with alcohol in a vehicle and they're under the age of 21, maybe there's another issue: the police either illegally stopped or searched the car without anybody's consent or probable cause.

But if the police drive by and they see minors drinking alcohol in a vehicle or it looks to them that children are drinking alcohol. If the minors are hiding the alcohol from the police, that will likely give the police probable cause to order everybody out of the car for officer safety.

Then, they will search the car, explore all of the individuals, and whatever they find, they're likely to arrest the person and call their parents, especially if they're underage. Often, if they're adults, they'll send to adult criminal court.

If they're juveniles, they'll give them a citation. That person will either end up in the juvenile court or will deal with the probation department deciding whether or not they're going to send them into criminal court with a petition.