What's the Difference Between a Preliminary Alcohol Screening Device, the Blood Test, and the Breath Test in a DUI? These are all tests designed to detect whether somebody's blood alcohol level is a .08 or greater.

First, when they stop somebody at a traffic scene, the police ask them many questions and maybe even perform a field sobriety test after they talk to the person.

Just so they don't waste a trip to the police station, they will often have the person blow into the Preliminary Alcohol Screening Device or PAS. It's a small device that they carry in their police vehicles.  Its accuracy is probably the worst of the three tests, but it measures alcohol.

They weren't usually allowed to get into what the result was years ago.  I've been doing this for 25 years, but now they can generally get that result.

The defense will try to block it, but depending on the circumstances of the case, the judge may or may not let that PAS result. So, that's something that's usually going to be done at the accident scene.  It's one of the least accurate of the three tests.

The breath test is the next test they will usually try to administer.  That's generally in Los Angeles County done at the police station where they have you blow into a tube.  It's attached to a machine that registers your blood alcohol. 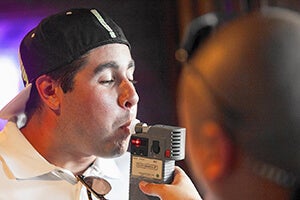 They usually like to get at least two results so that their expert can try to show at a trial that your blood alcohol level was a .08 or greater and hence, contact you for a DUI.  This machine is called the Intoxilyzer 3000.

It's a machine that does have issues with its accuracy.  Most experts — even the prosecutor's experts — will probably say it's got an error rate of a .02.  So, if you blew a .08 according to the machine, you could arguably be a .06.

That's why a lot of times in Los Angeles County, the prosecutors will give something less than a DUI to resolve a case where the person blew a .08.

Of the three tests, this is probably the middle of the road as far as accuracy, but certainly something the prosecutors use every day to convict people for DUI cases.

These machines have to be calibrated.  Sometimes there are problems with them.  That's another area, especially if you suspect the device may have inaccurately registered your blood alcohol level.

I've been doing it for 25 years, so once I can plugin where you're at, I can get a pretty good idea of whether there's some problem with either of the two breath tests.

Lastly, there's the blood test.  That's the most accurate test, and usually, what we will do if it's a close one — for example, the person blew a .08, .09, we may do what's called a blood split where we would test the blood ourselves with our expert to see if the police got it right.

This is good to do, especially in a close case or if you suspect some contamination in the blood, which is another way to up-end the prosecutor's key evidence to prove that the person was a .08 or greater.

So, these three tests are used independently.  Sometimes they're all used together. It depends on how successful the police getting somebody's blood or breath results. With the implied consent law in California, if you don't give your blood or breath, you will be presumed to be DUI automatically. You'll also lose your license for a year with no restriction.

So, they've got it set up pretty well, and these three tests are the primary evidence they use to prove DUI cases in Los Angeles county.

So, if they use these tests on you — either one of them or a combination of them you're going to want to sit down with somebody like me who can evaluate whether or not they're accurate and what you should do in your DUI case moving forward.