How Prosecutors Prove a DUI Case

Driver Was Unable to Operate a Motor Vehicle Safely

This is an important topic because I think this is where many people's confusion stems from in a DUI case. Often I'm talking to them, and they're telling me what a good person they are; they have a good job, and a good family and they're not keying in on some of the crucial issues of how the prosecutors can prove a DUI case.

First, as soon as the police start following a vehicle, if they suspect that that vehicle is involved in a driver being under the influence of alcohol or some other substance like Marijuana, prescription medication, or any other illegal drugs, they're going to observe the person's driving.

People under the influence of alcohol are usually swerving all over the road, not going with the flow of traffic, not paying attention — dangerously.  You can see them yourself when you're out on the freeway at night. So, that's the first thing they're doing.  They're observing the person's driving.

If somebody got in an accident, that would be one way to prove that they couldn't safely operate a motor vehicle because they got in an accident. Another way is that the police immediately evaluate that person for signs of some intoxication as soon as they contact the person.

How are they talking?  Are they slurring their speech?  Are they making no sense?  The police ask many questions to try to trip the person up.

Where were you coming from?  Where are you going?  Do you know where you are right now?  They're evaluating the person and whether they're acting normally under the circumstances. If their breath smells like alcohol, that's something the police will note. 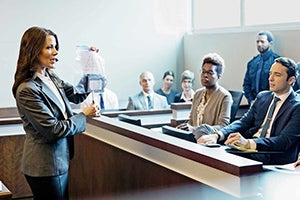 Then they're going to look and see how the person was walking, if a person is staggering and can't walk a straight line — if they can't cooperate with the police.

They're looking to see if the person can follow instructions.  Drunk people don't have that capability.  They can't cooperate.

And then, of course, part of the investigation and part of the way they're going to try to prove a DUI is if they can make the argument the person can't pass the field sobriety test that they have them perform.

These are all ways to prove a DUI because you're going to get charged with two sections.  One is Vehicle Code Section 23152(a), which says you had alcohol in your system or other drug and couldn't safely operate a motor vehicle.

That doesn't even consider the .08 law (CALCRIM 2111).  You can't drive safely, and you had some alcohol in your system.  Sometimes that's pretty easy for the prosecutors and police to prove.

The other Section, 23152(b) of the Vehicle Code, says you're a .08 or greater blood alcohol level. Therefore, the law will presume that you can't safely operate a motor vehicle.

If they can prove you blew a .08 or greater, there's a presumption in the law that you're DUI, and you have to try to rebut that presumption with other evidence. So, of course, the breath machine is another tool they use to prove a DUI case.

So, they try to put all these things together in front of a jury to show that you could not safely operate motor vehicle number one. Number two, you were intoxicated by some alcohol or other drug — whether it be Marijuana, prescription medication, or some other illegal drug like cocaine, heroin, or ecstasy — all ways to prove a DUI.

They put their evidence on.  Of course, the defense gets an opportunity to cross-examine each of the witnesses, bring up any mitigating circumstances related to your DUI case, and call any experts on the defense's behalf that can try and show you weren't a .08 or greater.  The defendant can certainly testify in a case and give their side of the story.

When it's all said and done, the two lawyers do the closing argument in the DUI case, and the jury will decide whether the person is innocent or guilty, so, if you want the nitty-gritty as far as figuring out whether the prosecutors in Los Angeles can prove the DUI case against you.

Your best bet is to sit down with somebody like me who's been doing this for 26 years.  We'll go over all the facts and details related to your specific case and see what can be done to help you. Hedding Law Firm is a criminal defense law firm located in the San Fernando Valley area of Los Angeles County at 16000 Ventura Blvd #1208 Encino, CA 91436.