Restitution to Victims in DUI Cases

This is an interesting concept because many people don't understand the natural reach of these restitution issues in DUI cases, especially in Los Angeles. Really what it means is that if you're involved in some DUI accident, somebody loses some money because of it, and obviously, whatever happened was your fault.

Then, most of the time, we're going to see that this has to do with some accident that you were involved in, then part of any resolution in the case is going to be that you're going to have to pay restitution to any victims related to the DUI case.

A perfect example would be my DUI case, where my client was driving along intoxicated.  He was over a .08, and somebody made an illegal left-hand turn in front of him, and there was an accident.

The police came to the scene.  I asked my client whether he'd been drinking. They gave the field sobriety test and tested his breath, and he was over a .08, so he was arrested for a DUI, and of course, the greedy prosecutors were trying to hold him responsible for the restitution.

But, I was able to show that there's a sign right in the middle of the street where the person turned left that you cannot make a left-hand turn there, so we were able to rebut the presumption in that case, and my client did not have to pay restitution to the alleged victim in the case.

But, it's not always that easy where you've got a sign right there clearly showing that the person drove right over where they're not allowed to go.

So, in most cases, the person's going to have to pay restitution and what that means is, if the other party or parties is out any property damage or any additional money out of their pocket, then the DUI driver will have to compensate the person.

Often, people have insurance, and the insurance company pays money to the alleged victim.  You'd have a good argument that some or all of the restitution was born in that scenario.

The issue will be, is the person out any money that's not covered by insurance.

Let's say that they get their car taken care of, but they had a $500.00 deductible and had to pay that out of their pocket.  As the DUI driver responsible for the accident, you would be responsible for paying that money. 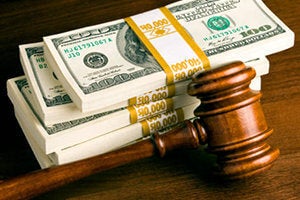 Let's say you or they didn't have any insurance.  Then you would be responsible for paying the money.  You had no insurance, but they had insurance, and their insurance company took care of their restitution.

Then you would likely be responsible for still paying the restitution. Still, that restitution would go to the insurance company because they lost money because of your negligent DUI driving.

Most of the law related to restitution and DUIs is all slanted toward the victims.  The one thing that the victims can't get is they can't get pain and suffering in a criminal case.

They could undoubtedly sue you civilly and claim that not only did you claim property damage, but you also caused them to suffer a great deal because of the injury, and in that case, they could try to get the money civilly from you.

Criminal and civil are paralleled often, so we'll get cases where it's a DUI.  Somebody gets hurt.  Their car is damaged.

They're trying to show that the person they're representing is seriously hurt because they want to drive that restitution up as high as they can, and that creates a big problem for the criminal defendant because prosecutors are usually listening to what the personal injury is saying, listening to what the victim in the DUI case is saying so sometimes they're trying to get more restitution than the person is entitled to.

So, that's where you'll need an attorney to fight them and challenge them at every step. As part of any deal in a DUI case, you're going to have to admit liability for purposes of restitution.

But when it comes to paying the restitution and how much the refund is, we try to get that locked in before you make a deal on a DUI case most of the time.  Sometimes that's not reasonably possible to do.

The one good thing is that you are entitled to a restitution hearing even after you plead guilty in a DUI case where the judge determines how much the restitution is and whether the victim has provided a certain amount of refund.

So, that would mean the victim would have to get on the witness stand and submit documents to the court and the prosecutor showing how much money came out of their pocket due to their DUI conduct.

So, if you have a case and it looks like there will be a bunch of restitution owing, you want your attorney to be there for you and try to do everything they can to limit your exposure and the damages related to your DUI criminal case.