Understanding the Evidence Against You in a DUI Case

One thing that will help you understand and deal with your DUI case is how the prosecutors present the evidence against you.  They have to prove to get you for a DUI that you were driving with alcohol in your system and couldn't safely operate a motor vehicle.

That's Vehicle Code Section 23152(a).  In that Section, it doesn't matter what your blood alcohol level is; it matters whether they can show there's alcohol in your system, and it matters whether or not you couldn't safely operate a motor vehicle. See CALCRIM 2110 Jury Instructions.

Then you start to ask yourself how they prove whether you could safely operate a motor vehicle, and the answer to that is by several different factors.  (1) they're going to look at your driving. If you're swerving all over the road or crashed into something, they'd have a good argument that you can't safely operate a motor vehicle.  That's a far cry from somebody drunk.

A lot of people say I wasn't drunk.  You don't have to be drunk.  You have not to be able to operate a motor vehicle safely. They're going to look at your driving; (2) they're going to look at how you're walking around when you get out of the car, if you're staggering or can't do those field sobriety tests that are supposed to be designed to determine whether you could safely operate a motor vehicle.

If you're failing those tests, they're going to have a good argument that you can't safely operate a motor vehicle. One way to present evidence to get somebody for a DUI is to show how they were driving and show how they were walking.  How about if you're slurring your words and you can't talk, and they've got their bodycam evidence on you, and a potential jury is looking at that, and they're saying, wait a minute.

Blood Alcohol Level is a .08 or Greater.

So, that's another way to get you for a DUI to present evidence that your blood alcohol level was a .08 or greater.  That California Vehicle Code Section is 23152(b).  So, you'll notice that people charged with DUIs are being accused of both Sections — 23152(a) and 23152(b).

One says you have alcohol in your system and can't safely operate a motor vehicle; the other says you're a .08 or greater. If you get hit with a conviction for either one of them, it's a DUI.  So, it gives the prosecutors two bites at the apple — two ways to prove that you were driving under the influence of alcohol and to get the conviction.

Often, when the people go to court, if they work out a deal and plead to a DUI, they can lead to the 23152(a) or the (b) count.  The prosecutors don't usually care.  They're both DUIs, and then they'll dismiss the other count.

So, when you're talking about understanding the evidence, you have to realize that the police, the CHP — who are the ones who are usually capturing people or the LAPD or anybody else in California who can pull people over and get them for a DUI, they're specially trained. 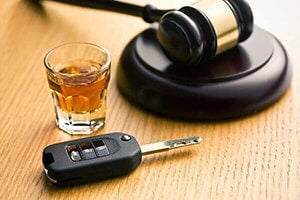 When they're driving behind you, that's when their investigation starts.  They're going to be looking to see how your vehicle is moving, and a lot of the cars are equipped with dashcams, so the dashcam will capture how you're driving on the road.

So, if you're swerving all over the road and almost hitting pedestrians, that will be captured, and when they pull you over and ask you for your driver's license and registration. Then they ask you if you had any alcohol tonight, and you say yes, I've had a couple; that's the start of their investigation.

They're usually trying to get your breath because it's easier for them.  Trying to get blood is a little bit of a pain in the neck.  They either have to take you to a hospital or wait, depending on how busy the hospital is.

They could also find a police station that can draw your blood and meet all of the evidentiary requirements to be able to preserve the blood so it can be used later on if the case were to go to trial or if you decided you wanted to hire your expert to test the blood and do what's called a blood split.

You have to take one of the tests.  The implied consent law says that.  If you don't, they'll get you for a refusal.  It will be presumed that you're driving under the influence of alcohol, and you'll automatically lose your driver's license for a year, which nobody wants.

So, understanding the evidence related to your case is best explained to you by your DUI attorney because they will have all the evidence from the police reports. Also, the information from you and then they're able to look forward, having done jury trials before, and see how the prosecutors will present that evidence so you could have a good feel whether you'd have a chance if the case were to go to trial.