What Happens During a Typical California DUI Investigation?

People don't seem to realize and unfortunately fall prey to every night on the streets of Los Angeles and across California that law enforcement is out in force. This is especially true during the holidays and the weekends to catch those individuals drinking alcohol and driving their vehicles. So, you should be aware that it usually happens if busted for a DUI.

They are specially trained to identify people who are driving erratically, swerving, getting involved in accidents, and otherwise.  As soon as they pull the vehicle over, they will start their investigation.

They're going to conduct field sobriety tests specifically designed to determine if somebody is under the influence of alcohol to the degree that they cannot safely operate a motor vehicle.

If your blood alcohol level is a .08 or greater and the police, through their subjective observations of you, believe that you're not passing the tests that they're putting you through, you're going to be arrested for DUI.

They're going to take your blood or take your breath, and if you don't cooperate, they'll give you a refusal, and then you'll lose your driver's license for a year with no restrictions. 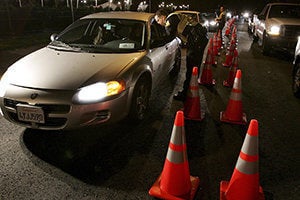 Then they're going to take you to the station.  They're going to observe you.  That's one thing people don't realize when you're talking about a DUI investigation.

What if the police's observations are some of the main things that the prosecutors rely on when they file a criminal case against a specific individual. The police are going to watch how you're driving.

They will look to see how you're acting when you exit your vehicle.  Are you staggering?  In other words, how are you walking?  Does your breath smell like alcohol?  Are your pupils dilated?

That's why they're putting the flashlight in your eyes and making you watch a pencil or a finger, and they're making your eyes go back and forth to see if you have smooth pursuit, to see if your pupils are bouncing.

So, the investigation starts even before they pull over, but mainly during the pullover, and they're going to ask you a bunch of questions to see if they can trip you up. This is another indication that somebody is intoxicated and can't safely operate a motor vehicle.

So, when you're thinking about an investigation, realize it starts when they get behind your vehicle or come upon your car if it's stopped on the side of the road or you become involved in an accident.

That's another thing.  People are involved in an accident. Whether the accident is their fault, they don't realize that the California Highway Patrol comes swooping up.  They're not looking to help you in the accident.

I can't tell you how many of my clients have been arrested, and the accidents they were involved in were not their fault.  The CHP or police department that's involved doesn't care about that.

Police Will Ask a Series of Questions Related to DUI

They're going to be asking you how many drinks you had, what type of alcohol were you drinking, where you were, how much you had to eat.  They're going to get your height.

They're going to get your weight because they're setting things up for a future potential trial, and their expert to be able to use the data they're collecting to prove that you were driving under the influence of alcohol. You could not safely operate a motor vehicle.

That's why they're getting all that information because what ends up happening is, if they don't get that information when the DUI attorney cross-examines them, they're going to bring up the fact that you don't even know how much that person had to eat.

That's the crucial thing they will have to look at if they want to get somebody for a DUI.  That's why the police are grabbing all that information, and people don't even realize it as they're handing the info over instead of utilizing their rights to remain silent.