What is Blood Alcohol Level Evidence?

This has to do with DUI cases and the police and prosecutors trying to figure out what a particular person's blood-alcohol level was about a DUI, and there are several ways that they can test that.

Right now, the legal limit in California is .08.  So, if you're found to have a blood-alcohol level of .08 or greater, it's presumed that you cannot safely operate a motor vehicle, and the prosecutors can get you for a DUI.

So, the most common way to measure your blood alcohol level is to do a breath test. You would go into the police station and blow into a machine. It measures your alcohol level.  It's pretty accurate.  The prosecutors can call experts to testify to the accuracy and the science behind using one of those breath tests at the station.

Also, there's a hand-held device that the police carry in their police cars and motorcycles to test the person's blood-alcohol level.  This is called the preliminary alcohol screening device or PAS — a PAS device — and this is not as accurate as the test at the station, but it's still a form of measuring somebody's blood alcohol level.

It's used all of the time by the police.  They use that as just another tool to determine if somebody cannot safely operate a motor vehicle.

Also, if the person is well under the legal limit, that will save them time and effort for dragging them into the police station to do the breath test, only to see that the person is only half the legal limit and can't charge them with anything.  So, I think that's another reason they use that to measure blood alcohol levels.

Another test that makes sense is to do a blood test.  They take your blood and analyze it, and they see what your blood alcohol level was at a particular time.

Assuming they can pinpoint the time that you were driving your motor vehicle, they'll have an expert if the case goes to trial be able to extrapolate backward and say, about 10:00 p.m. the person was a .10. 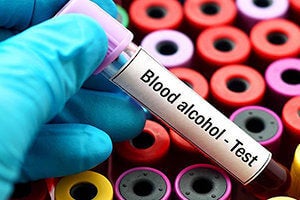 This particular person would have been a .09, for example, at 8:00 p.m. when they were driving the motor vehicle.  That's a type of evidence that the prosecutors use to prove these DUI cases.

Blood evidence is commonly known in the DUI community to be the most accurate test available.

There's also a urine test used by law enforcement but is not used as frequently anymore.

Usually, they use a urine test to see if they can determine whether somebody has some drugs in their system for purposes of a DUI or is under the influence of drugs. Still, urine is another way to decide whether or not somebody's blood alcohol level is a .08 or greater.

So, this whole concept of blood alcohol has to do with DUIs and whether the police can show that a particular person had a blood alcohol content of .08 or greater.

Utilizing the test becomes essential if the person is close to the legal limit. Also, experts can become significant in evaluating whether or not a particular person is a DUI. The example I would give you is in a blood case; somebody can do what's called a blood split where blood is taken, and your expert analyzes the blood to determine whether or not you were a DUI, and then if the case goes to trial, you can call your expert.

If they get a different reading than when the police got when they evaluated your blood, if that reading is more helpful to you, your expert can testify, I got a blood split.

I was able to test the blood, and my reading is different; I don't believe that the person was in a position where they could not safely operate a motor vehicle, and here are the reasons why.

That would be a way to challenge the prosecutor's evidence. They're going to try to show that your blood alcohol level was a certain level and argue that you could not safely operate a motor vehicle.

So, blood alcohol evidence is significant.  It's probably one of the biggest factors used and evaluated by juries in DUI cases, but it's not the only factor.  In addition to your blood alcohol level, they're also looking at how you were driving. They're going to look at how you were walking around, how you did on the field sobriety tests.

The police have several different tests and are specifically trained in these DUI cases to try and evaluate on a bunch of other fronts whether somebody could not safely operate a motor vehicle. It will be up to your defense attorney to challenge this evidence if you decide to take your case to trial.