Typically, all of the courts in LA County, and there are a lot of them, will negotiate deals other than DUIs if you blew on the legal limit and the reason for that is because the machine that they're using — usually the breath machine — has an error rate of .02 either way.

So, there's an argument even from their expert that the person might have been a .06, a .07 under the legal limit.  Of course, they'll look at the other factors surrounding the case, like how you performed on the field sobriety test, how your driving was, and a host of other factors.

But if you blew a .08 (CALCRIM 2111), you have an excellent chance to get something other than a DUI, at least in Los Angeles county.  For example, the prosecutors could give you a speed exhibition.  It has nothing to do with alcohol.  For instance, it's just the same as screeching your tires out of a parking lot.

It's not the same as a DUI, but it's more reckless-related than a driving under the influence-related offense.  It would be better.

Although, when you're talking about getting a better resolution, bringing the speed contest, exhibition of speed or some other non-alcohol-related offense would be the best-case scenario if they're going to give you something less than a DUI.

I've also heard and seen and been a part of cases where they give moving violations, like an illegal right turn, speeding, instead of a DUI. Still, those are very difficult to get in Los Angeles county unless they have a real big problem proving the case against you.

Negotiation with Prosecutor for Reduced Charges

So, if you blew a .08, you want to get an attorney because that attorney will be able to do a lot more things in Los Angeles county related to a DUI than they will be able to do if you're much more than a .08.  Of course,09, .10, you're in the ballpark of getting a better offer than someone usually would get on a first-time DUI. 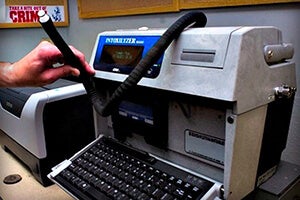 Even if you blew a .08 to get a resolution below a DUI, you might have problems. If you got into an accident, you had other dangerous factors like a very high speed going over 100 miles an hour.

A whole host of other things can happen that can even take people who blow .08's out of the realm of getting something less than a first-time DUI.

Also, if you have prior DUI's on your record and you blow a .08, or if you're on probation and you're not supposed to have any alcohol in your system, and you blow a .08, that would create a big problem as far as trying to get something less than a first-time, second-time, third-time or fourth-time DUI, depending on what your criminal record looks like.

So, as you can see as you start to look at this issue and think about it, to have any chance of either getting the case dismissed or getting a lesser offense than a DUI, you've got to have a seasoned attorney by your side, armed with all of the mitigating factors related to you to try to counter any harmful elements that the prosecutors and police are going to bring up to the judge.

When you're negotiating DUI cases in Los Angeles County, the negotiations are between the prosecutor and the defense attorney, so you want to arm your defense attorney with as much information as possible about you.

This includes your circumstances, the day or night of your arrest, and what happened, so they have all the beneficial information when they talk to the prosecutor.  They've got your version of events, and they can best represent your interests related to your DUI-related offense. So, if you blew a .08, pick up the phone.  Call us.  We're here, ready to help you.  I can set up a face-to-face consultation with you and start to plan exactly how we're going to deal with your DUI case.