I've been doing DUI cases for twenty-five years now in the Van Nuys criminal court, and I think I have a pretty good idea about how they handle claims.  First off, the DUI law across California has changed over many years for the worst as far as people getting DUIs.

It has become a very political hot-button issue.  Anybody who goes into the Van Nuys court with a high blood alcohol level will be ordered to do an AA meeting during the pendency of their case.  So, while their case is pending, the Judge wants them to do AA meetings.

Courts figure somebody coming in with a high blood alcohol level has probably got an alcohol problem.  Whether it's true or not, they don't care because they figure someone who's drinking to that level and getting behind the wheel is dangerous to the public.

So, they have to figure out a way to stop that person.  What can they do?  What types of measures can they employ?  So, that's one thing I've seen them do is force that person to do AA meetings while their case is pending.

Another thing that I've seen going on in Van Nuys recently is if you have multiple DUIs and you continue to get DUIs, or if you get a DUI while you're on probation for a DUI, they're going to make you put a scram bracelet on. 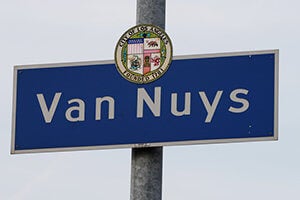 This detects whether or not you're drinking alcohol, and as a condition of your release, they're going to order you not to drink, and if you drink, you violate your freedom, and you go into custody.  They figure you can't get any alcohol in charge.  You can't go on the road, and you can't danger other people.

That's one thing people don't seem to realize when it comes to DUI cases is that they're just looking at themselves and the impact to them of their DUI case.  They're not looking at the millions of deaths over many years related to DUI-related fatalities.

And since the prosecution of a DUI in Van Nuys court is a criminal offense, or you can be charged with a misdemeanor; you could be charged with a felony; you're looking at jail time, even prison time, if you hurt somebody.

It would help if you got an attorney who's been down the road you're about to travel, who knows how to handle a Van Nuys DUI case, knows what the tendencies are of the prosecutors and judges in that courthouse, and knows what it's going to take to get you the best result.

First, you have to figure out, in your circumstances, in a Van Nuys courthouse case, you're going to start in Division 101, and that's the misdemeanor arraignment court in Van Nuys.

That's where all the DUIs go through, so the Judge there is very familiar with handling DUIs.  He's got a pretty good background on when he's going to make people do AA meetings; when he's going to make them put the Scram bracelet on to be consistent. The prosecutors will figure out when jail time is necessary to stop somebody from continuing to get behind the wheel while intoxicated.

Call our Law Firm for Help

So, if you have a Van Nuys DUI case, pick up the phone. Talk to somebody who's been doing this for twenty-five years. Let's get a plan together.  Let's figure out from the beginning what the strategy will be, and then we'll put the pieces in place to execute that strategy to perfection.

We want to get you out of the criminal justice system, protect your rights, protect your freedom, protect your driving record with the DMV because they're going to get involved with the case as well, and when a DMV hearing is involved, they can take your driver's license away.

They can restrict your driver's license. They can make you put an ignition interlock device on your car.  We not only handle the criminal aspect of the DUI, but we also handle the driving aspect, and driving on the roads in Van Nuys or anywhere in California is not a right; it's a privilege, and they can take that privilege away from you if you endanger the community.