Charged with DUI for Prescription Medication Only

Can You Be Charged with a DUI in Los Angeles if You Only Have Your Prescribed Medication in Your System? This question comes up when people drive around and either get in an accident or the police pull them over. They've only got their prescribed medication in their system — no alcohol, no other illegal drugs.  They come into my office because they've been cited in a courthouse for driving.

For example, several years ago, I had a client who was an attorney, and he decided before he left his office that once he got home, he wanted to fall right to sleep because he was tired.  He was working late at his office.  He knew he had to get up early the following day, so he took an Ambien.

On the way home on the 101 Freeway, he crashed into the center divider and was eventually arrested and charged with driving under the influence.  He had no alcohol in his system and no illegal drugs.  He had the Ambien, which his doctor had prescribed.

He was charged with a DUI because he had something in his system that caused him not to operate a motor vehicle safely.  He should have known not to take the Ambien before leaving the office.  That's really where they're judging you is when you're sober.

They're not going to judge you when you're under the influence of Ambien.  You can't make any decisions, especially if it hits you hard enough to beat him.

The point is anything in your system; they're trying to charge you with a DUI.  Now, there are defenses.  Let's say that you're at a bar.  You're the designated driver, and somebody slips something into your ginger ale.  You don't know about it.  That's involuntary intoxication. 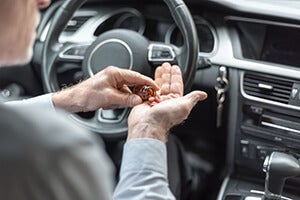 That can be a defense to a DUI.  You didn't know.  It's not your fault.  If you can prove that we can get video from the bar showing somebody slipping something into your drink, the prosecutors will not prosecute that case.  Once they realize that, they'll dismiss it because they know they will get their asses whipped at trial.

It starts to get a bit tricky when a doctor prescribes you medication, you take it, and somehow you have a bad reaction to it.  Now they're going to start to get into, what did the doctor tell you about that?  Are you allowed to drive?  What does the bottle on the prescription say about you being able to go?

And of course, if you mix alcohol with prescription medication, even if your alcohol level is below .08, they're going to be still able to get you for a DUI if they can prove that you couldn't safely operate a motor vehicle by way of how you were walking, talking, driving, how you performed on the field sobriety test.  That's really what's meant to be used to test whether someone can safely operate a motor vehicle.

So, you start to see how these things are evaluated when determining whether or not — even though you didn't have alcohol in your system in Los Angeles county — somebody can charge you with a DUI.  That's where somebody like me, who's been doing this for 26 years, comes in.

If you've got an argument that either you really shouldn't have known — no reasonable person would have known that they would be under the influence. Maybe somebody slipped something in your drink — there are all sorts of different angles.

But, of course, whatever the argument is, you have to bring evidence to support it, and you have to have a powerful advocate that can make the argument for you so that it makes sense.  A jury believes it, or the prosecutors believe it themselves and dismiss the case.

If you're drinking alcohol — even if you're under the legal limit — and mixing it with prescription drugs, that's an example of unreasonableness.  You can't do that.  You're putting yourself and others on the road in jeopardy.  You're likely going to lose that argument.

So, have to look at the facts and circumstances surrounding what happened, surrounding your arrest, and surrounding how you became intoxicated.  Another thing is, were you drunk?  Sometimes someone might take some prescription meds and get in an accident — may be the accident is not their fault.  Perhaps they just made a mistake, and it had nothing to do with him being intoxicated.

So you start again to get a feel for how these things are evaluated and how important it is to have an attorney who has experience. In defending DUI cases that don't involve alcohol and supporting people in the courthouse where your case is pending.

You need a lawyer who knows how the jury is, sees how the judges are, and the prosecutors' tendencies. Many different factors play into this, and if you're talking about drugs and DUIs, you have to know how to deal with a Drug Recognition Expert.

Because the police — if they're halfway bright — and they're not always — sometimes they're using alcohol-related tests to test somebody who has no alcohol in their system.  Stupid, they're not going to be able to use the results of that test.

But if they're smart and see that you didn't blow anything in the breath machine, they're going to say there's still something wrong with this person.  Then they're going to get a Drug Recognition Expert to perform the appropriate tests on you.

They will also perform several other tests designed to determine whether or not you're under the influence of something, number one and number two, and whether you can safely operate a motor vehicle. Now, if they get somebody who's an expert to testify against you, they start to get some leverage to build a case to contact you for a DUI even if you didn't have any alcohol in your system.