We've been handling DUIs mainly throughout Los Angeles County for the past twenty-five years.  So, we are in downtown Los Angeles, and the Metro Courthouse controls that.  That's where most of the DUIs in LA County are filed.

We also handle cases on the west side — Hollywood, West Hollywood, and areas near the airport, where the airport court/LAX court — hails many of that west side DUIs and then finally, there's the San Fernando Valley which is controlled by San Fernando Courthouse and Van Nuys Courthouse, so we're going a lot of cases there.

One of our main offices is in Encino, about five minutes from the Van Nuys Courthouse.  So, we know most of the significant, heavy-volume DUI courthouses in Los Angeles County, and we're there all the time.

We're making appearances every morning, so we have a pretty good feel for the tendencies of the judges and the prosecutors in those courthouses.  We also have a good feeling about the value of a DU I case and whether or not you have any chance to be able to getting the case dismissed.

These are essential things that most people want to know when they're arrested and put in the back of a police car, taken down to the police station, and then eventually either cite it out or be given bail to appear in court. 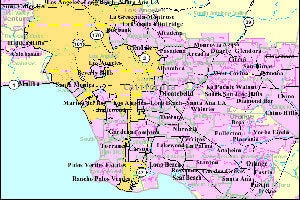 They want to know what will happen when they get to court.  Is there any way to get rid of the DUI, and if you can't get rid of the DUI, what are your best options moving forward to get a bare minimum punishment that doesn't affect your driving record.

You also want to know how to deal with the DMV.  As you look at these various DUI laws, you have to realize that the DMV controls what will happen to your driver's license.

So, that entity is different from the criminal court, which will control what happens with your criminal record.

The biggest thing you want to concern yourself with when you're figuring out what city your DUI is is what courthouse that attaches to. Every city is chopped up into a jurisdiction controlled by a particular courthouse.

The more conservative the area, the more difficult it will be to get a fair resolution for your DUI case, and the more liberal the location, the better chance we'll have to get you a favorable result.

Large Volume of DUI Cases in The Bigger Courthouses

Also, I've noted recently that many of these big courthouses are so crowded that the prosecutors have gotten a lot more reasonable with the DUIs because there's too much volume to deal with. If they're not affordable, many cases will get stacked up for the trial, and they won't be able to resolve them.

But in all of the cities in Los Angeles County, it's pretty common sense as far as whether you'll be able to get your case dismissed.

If they have a problem proving you were a .08 or greater, you have a chance to get the case dismissed.  If you're well over the legal limit and the police did everything right, you have almost no opportunity for them to agree to get your case dismissed. Any lawyer saying differently is just simply not telling you the truth.

So, I encourage you to pick up the phone if you want to talk to someone who will give you a straightforward assessment of your case, no matter what city it's in.  Make the call.  I'm happy to set up an appointment and talk to your Los Angeles County DUI and see what can be done to take care of it for you.

My DUI defense law firm and attorneys have successfully handled DUI cases in Los Angeles County for many years. We are familiar with the Los Angeles DUI Courts and the prosecutors and judges that prosecute and sentence DUI drivers.

The CHP and other law enforcement officers are rewarded with the most DUI-related arrests. On a Friday or Saturday night in cities across Los Angeles County, they are waiting for any reason to pull over drivers that they see on Los Angeles roads.

If you have been unfortunate enough to be pulled over in Los Angeles and arrested, call me now, and let me figure out the best way you can protect yourself and your rights. If you do not get someone on your side now, you will suffer consequences that will impact you for years to come.

The DMV and the Los Angeles criminal courts are not your friends in this situation. They need money to prove that they are punishing DUI drivers. You need someone who is going to look out for you!

Though the system and its players are out to punish DUI drivers in Los Angeles, the prosecutors and judges will listen to reason, and they know that many people drink and drive and don't get caught. Many important factors cause them to seek harsh punishment.

They will also consider mitigating factors that your attorney can point out to them in a DUI case. Call me now, and let's discuss the best course of action to put this mistake behind you.