When it comes to these DUI stops, the police make errors all of the time.  The problem is trying to be able to catch them.  The way that's done is through body cam video or dashcam video or independent witness that sees what they're doing.

The defendants themselves can challenge the police to prove that they committed errors. Still, a lot of times, it comes down to your word against their word, and if you're severely intoxicated, your credibility is not as good as the police coming in stone-cold sober when it comes to your case.

One of the first errors that the police make that I can see and that I've challenged throughout the years is that they illegally stop people.  So, they're stopping people in the middle of the night on a Friday or Saturday night who they assume are probably coming from a bar, but they're not allowed to do that.

They can't randomly stop people unless they set up a valid DUI checkpoint.  They have to come up with some reason or excuse to stop you.  If they see a moving violation, they can stop you, and they're fine. But, if they're just randomly stopping people out late at night, that would be an error, and everything found after that can't be used against a defendant.

The following error that I think the police make related to DUI enforcement is, instead of just giving the person a ticket because they're usually stopping them. After all, they were speeding or made an illegal lane change or were driving without their lights on or whatever excuse they come up with, give the person a ticket and let them move on. 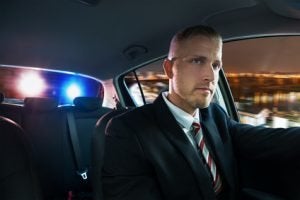 But what they do is they're looking to catch the person for a DUI, so they're asking them a bunch of questions to try to get them to incriminate themselves.

Miranda doesn't apply yet because you're not in custody.  For your Miranda rights to use, you have to be in control.

There are circumstances where the police grab you and won't let you go, and it's the same as being in custody. Your defense attorney would be able to make that argument on your behalf and try to challenge any statements.

But when you look at what police are doing, somehow they're getting inside cars, searching them, conducting a full DUI investigation, exploring the person, getting them out of the vehicle, making them do field sobriety tests,  and all they did was pull them over because they were weaving for example.

So, how do you not have to write a ticket a move on?  They do most of the time, but other things come into play.  For example, if they come upon you and your whole car reeks of marijuana, you're just helping the police to be able to search the car.

You're helping the police to be able to conduct a driving under the influence investigation.  If they come up and you start talking to them and saying a bunch of stuff, and your breath smells like beer, again, you're just helping them.  Then they're going to be able to get you out of the car and ask you a bunch of questions.

Probably the most significant and easiest trick the police have is they say, have you had any alcohol to drink tonight?  And if you say yes, it's on.  You're getting out of the car.  You're done. So, if you say no, I haven't had anything to drink.  If you're going to write me a ticket, do it.  I want to get on my way, and now they continue to do other things that are not permissible; this is another error that the police make, and sometimes your DUI attorney can capitalize on that.

Proving You Were Driving Vehicle

Another error that I see is they didn't pinpoint when you were driving the car.  Sometimes the police don't catch you going.  They come upon you.  You're already out of the vehicle.

So, suppose they didn't pinpoint when you were driving the car. In that case, they're going to have a bad problem in the future trying to get you for a DUI because their expert who is evaluating your blood or breath that they eventually get, is going to need that information — when you were driving — to be able to say what your blood alcohol level was at the time of driving versus when the police took your blood or breath.  So, this is another potential error in a DUI case that the police make all the time, and an intelligent DUI defense attorney can capitalize on this.

Waiting Too Long To Take Breath or Blood Tests

Another error I see as an error is that they wait too long to take your blood or breath.  Once you get past three hours — and there are some cases like that — their expert will have a terrible problem proving your blood alcohol level.

Title XVII starts to apply where this breath or blood test three hours later really can't be used against you in your DUI case, and without it, a lot of times, they have a real hard time proving the case against you. So, there are several different errors that the police make.  They aren't all applicable in every DUI arrest.  So, don't be fooled by these people who are telling you a whole host or a whole list of issues because those issues often don't apply to you.

You want to get a seasoned DUI defense attorney.  Tell them what happened in your case.  Be honest about it, and then let them decide what DUI issues might apply to your lawsuit, what's also necessary for them to need the police report, which they'll typically get at the time of the arraignment, to look at the other side of the equation, the other puzzle pieces.

That combined with your statement — they're experience — they're going to be able to put together a strategy that will work best for you and make the best sense for you so you can get the best result in your DUI case.