Driving In Possession Of Marijuana – Vehicle Code 23222(b)

Driving Under The Influence of Marijuana

So, if you exceed that amount and have that amount in your vehicle, you can be charged with an infraction. Interestingly, many people have let their guards down regarding marijuana, while the authorities, on the other hand – because I'm in the Los Angeles courts dealing with DUI cases all the time related to Marijuana.

The authorities have not let their guard down. They have formed new task forces and stepped up their actions regarding driving and having marijuana or being under the influence of marijuana.

Suppose you're under the influence of marijuana, and you're driving a vehicle, and you get pulled over. In that case, the authorities will arrest you and charge you with a DUI, just as though you're driving with alcohol in your system. 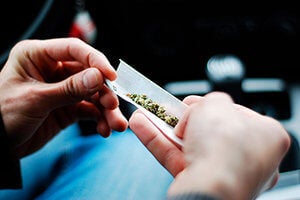 And these cases are not necessarily even to defend. Often, it's tough to figure out the amount of marijuana in your system and how much it has impacted you.

It can even get more complicated in possession of Marijuana in a vehicle case when they also hit you with DUI drugs, and you have both Marijuana and alcohol in your system.

Really what it boils down to is that it is just an unsafe practice to have Marijuana in a vehicle and alcohol in a car. You're just itching to get a ticket. You're itching to potentially get a DUI and get a mark on your record that you can't get off.

There are legal ways to possess marijuana in a vehicle. That would be to have it in a sealed container where the seal has not been broken, and then – as long as you possess the requisite amount – then you can do that.

It's just not a good idea to have Marijuana in a vehicle, especially if your car is not up to snuff. They can just pull you over for any reason – because you don't have one of your front license plates, for example, or one of your headlights is out, or you're driving recklessly in the streets committing traffic violations, and they're going to pull you over. If they smell Marijuana, they're going to look around.

They're going to ask for consent to search – it's just not worth it for you to do that.

Defenses To Possession Of Marijuana In A Vehicle

A prominent defense to possession of Marijuana in a vehicle would be that you have the requisite amount and you had it properly stored. If you can show that, you have a good argument that you lawfully possessed Marijuana. People who have Marijuana in a vehicle, as long as they meet all the rules – the authorities know what the rules are, and they're not going to be able to do anything.

That's probably the best defense for this possession of Marijuana case. But be leery, because if you're also smoking Marijuana in the vehicle or you have smoked Marijuana, and you're driving a car, the authorities are going to be looking to get you for a DUI.

You look like you're intoxicated. You're driving poorly. You're walking incorrectly, and then you didn't pass their drug recognition test, and then they are going to cite you and arrest you for a Marijuana DUI, which you may or may not be able to defend.

What if you smoked it the day before? Again, you're just playing defense and putting yourself in the wrong position when you possess Marijuana in a vehicle.

If you have one of these cases and need a DUI lawyer, come sit down and talk to me. We'll go over everything.

We'll talk about all the facts and circumstances related to your case. We'll see what we can do to preserve your record, driving rights, freedom, reputation, and all the essential things to you and get you out of the criminal justice system as quickly as possible with this possession of Marijuana in a vehicle charge.