Driving on a Suspended License Because of a DUI

This is a widespread offense that I represent clients throughout Los Angeles County and the various courthouses related to DUI cases.  I've been doing it now for 25 years, and this is something that the police target. Driving on a suspended license for a DUI conviction is described under California Vehicle Code 14601.2.

They get people for driving on a suspended license — and their support was broken because they got a DUI, didn't comply with everything they were supposed to with the DMV, and then started driving again.

This is a common offense because people have to drive in California.  In other words, it's such a vast city.  It's so crowded that people have jobs and various other things that they have to do that it's just not feasible not to drive.

Sometimes people have to get a job.  Sometimes they have to get to a medical appointment.  There's a whole host of reasons why people have to drive.  So, during the time they're not supposed to be going, during that punishment time for their DUI related to their driver's license, people end up going, and for some reason, they get pulled over.

You would think people would be more cautious if they're driving on a suspended license, mainly because their license was suspended because of a DUI.  They know if they get pulled over, they're not only going to get a crime charged against them, and it's the type of crime where they're looking at jail time. 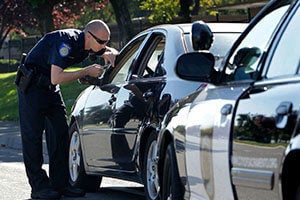 They're also going to get what's called a probation violation in their DUI case, and they're going to have to go back and face that judge again.  Part of the terms and conditions of a DUI probation is to not drive without a valid driver's license because they know people will go.

They know people are dangerous out on the road who get DUI cases.  I'm arguing with prosecutors all the time because they're trying to put my client in jail based on driving on a suspended license because of a DUI.

They consider that much more of a problem than somebody driving on a suspended license, maybe because they got points or didn't pay their registration fee or whatever reason.

One mitigating factor that I indeed point out to the prosecutors is if the person wasn't drinking and driving when they got pulled over for the suspended license violation.

But, also, if the person was driving safely and just got pulled over for some ticky-tack reason or even another thing we see happening throughout LA county, there's something called an H20 Squad. These guys are particularly trouble in Van Nuys court.  They will figure out all the people who have court appearances for DUI on a given day.  They will then camp outside the courthouse.

They run driver's licenses, follow people from the courtroom where their DUI case is pending, more specifically, Division 103 in Van Nuys, and they will see if those people go into cars.  They'll know if they're driving, and they'll know if they have suspended licenses.  They're going to pull them over.

They're going to cause them to get a probation violation, and they're going to cite them and arrest them for a new suspended license case. They know when they capture people like that number one, the person's license will probably get suspended for a more extended period because of that arrest ad-related offense.

They know the person is likely to go to jail probably.  So, they're targeting and preying on these people coming out of the courts.

You have to be aware of that, and if you want to try to combat this, you have to get an attorney like me who's been doing this for 25 years, knows all the ins-and-outs of DUI cases, suspended license cases, knows what the defenses are, knows how to do damage control and mitigate these cases so you can end up with the best possible result.