Why Was The Driver's License Suspended?

This is a terrible problem for somebody who doesn't have a license, gets in some accident, or hurts somebody in the roadway, and then that person has to go into criminal court and face the judge.  The just will be looking at several different factors in deciding exactly how to deal with a situation like that.

For example, one of the questions will be why the person's driver's license is suspended?  Is it because they have a DUI on their record and haven't done everything they were supposed to?

That usually means the punishment will probably be the worst because of the prior DUI. Still, the person is perhaps on probation, and there will be a probation violation hearing in addition to the new case.

Sometimes people get in a minor fender bender, and they're claiming soft tissue injuries.  That's a questionable injury, and that's something that might be able to be fought.

On the other hand, if somebody is hurt and has an injury that can be justified, then the person who caused that injury driving on a suspended license will be looking at some severe penalties. You will likely face a driver's license suspension if convicted of a DUI.

If you have a DUI and are on probation, you do not want to drive if you don't have a valid driver's license because there's another issue when it comes to these injury cases with suspended privileges.

Alcohol in Your System While Driving

If you get in an accident and you have any alcohol in your system, it's going to be presumed that you're the one that caused the accident. 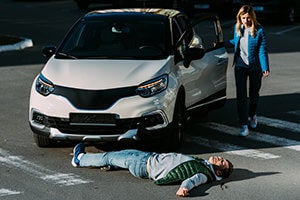 So, the bottom line is, when we go into court on a California Vehicle Code 14601.4 where an injury has been caused, the person had no driver's license, one of the biggest things that we can do to help ourselves is to get a driver's license or to be able to show the court and prosecutor when we might be able to get our driver's license because that indicates that you're trying to do something.

That shows that you are not just ignoring the system.  Sometimes they even have cases where they're getting driving on a suspended license, and the person could have gotten their driver's license, but for some reason did not.

That's a good argument to the judge and prosecutor.  You say they could have had their driver's license, so don't punish them to the full extent of the law.

But if you've got driving on a suspended license, somebody got injured, and it has to do with DUI activity, there is mandatory jail time that goes along with that.

Prosecutors and judges are very quick to give that because they feel that if they don't do something to punish you — they don't show seriousness about things. In the future, you get in some accident, and somebody gets seriously injured or even killed.

They're going to be held responsible for that because they didn't do what they were supposed to when they had you for the 14501.4, driving on a suspended license causing an injury.

Also, there's an issue with the restitution in these cases.  Suppose somebody gets hurt, and they need to get paid back for medical bills, their vehicle, or any other out-of-pocket money. In that case, the court is going to hold you responsible as the driver who was driving under a suspended license and caused an injury, and you're going to have to pay those people back.

If you don't, they will not let you off probation, and they will even throw you in jail under some circumstances. So, it's crucial in these cases to get an attorney.  Hire somebody who has handled these cases before, has the experience, and knows how to control damage and get you the best possible result.