Property Damage vs Injury in a DUI Case

The line between damaging somebody's property and injuring another person in a DUI case is significant because there's a vast difference in punishment if someone is injured.

If it's a severe injury, then instead of being charged with a misdemeanor in a DUI, you will be charged with a felony.  You're going to be looking at prison time.

If it's a real serious injury, they'll charge a great bodily injury allegation, a 3-year enhancement on top of any conviction that you get for the underlying DUI. It is also classified as a strike and violent felony, and you'll serve 85% of the time. See CALCRIM 2100 – Driving Under the Influence Causing Injury.

If, on the other hand, nobody gets injured and there's just property damage in a DUI case, it's most likely going to be filed as a misdemeanor, and you won't be looking at prison time. You might not even be looking at any jail time, depending on how reasonable your DUI attorney is.  So, this distinction between property damage and injury is a big one.

Often, people get in a bit of a fender bender, and the other party tries to claim that their neck or back hurts or some other body part hurts, and they're just trying to get money for a personal injury.

Sometimes, the prosecutors can't tell the difference when people try to dummy-up an injury versus actually hurting.  Often, these people get lawyers involved who interact with the prosecutors and make things much more challenging to resolve.

So, suppose you have a case where you've gotten in an accident and are arrested for a DUI. In that case, you'd better get to a defense attorney quickly so that the defense attorney can start making moves on your behalf that protect your interests and who can also correctly advise you on how you're going to deal with the insurance company and the other party.

The defense attorney will deal with the prosecutor and judge on your behalf relating to an accident, injury, or property damage case.

Paying for Damages to Other Vehicles

If you get involved in a DUI and damage many vehicles in that DUI, you will be responsible for paying the owner back for those vehicles. This is a big responsibility because if you don't have insurance. 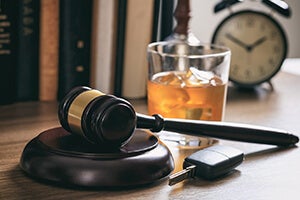 It puts you in a terrible position because the prosecutors give the best resolutions to individuals with insurance in property damage DUI cases.

Also, for those who can pay back the driver or drivers of the other cars and for those individuals who can come out of pocket, if necessary, to make sure that the victim is made whole.

So, even if you have a property damage DUI and nobody got hurt, it can still be a problem if you're not taking care of business and making sure that the other party is compensated for any damage.

Not just to the vehicles, but sometimes people hit other property. I had one client hit one of the signs in Dodger Stadium and damage that severely.

That cost a lot of money to repair because it was an old sign.  This is just one small example of hitting things in your vehicle and driving under the influence of alcohol or drugs or both.

Even if you do get jail time, you're still going to be ordered to pay the person back.

So, restitution can be necessary for property damage and even injuries in a case. If you commit a DUI and you hurt somebody, that person can seek reimbursement in medical bills or lost earnings from their employment.

Also, anything else that's out of pocket because of what you did, and the prosecutors vehemently seek these damages in a criminal case. They try to get the restitution for the victim and make sure the victim is paid back.  This is a critical issue to deal with in a criminal DUI case.

I've had to deal with other lawyers on the civil side trying to come at my client and make things difficult for us in the criminal court.  There are a lot of different balls that have to be juggled.  Many different hats need to be put on by your DUI defense attorney, so make sure it's someone experienced and seasoned.

I've been doing this for 25 years.  I know how to handle these types of cases.  If you're looking to get your situation, take the first step.  Make a phone call, and let's move in the right direction.