What Determines Whether Prosecutors Will File a DUI?

This is a big question on a lot of people's minds, and when they call me or come in and meet with me regarding a DUI arrest, they're usually talking about how they have a good driving record, a good job, a family, and they can't have this conviction on their roster.

Those aren't the factors prosecutors are looking at when deciding whether or not to file a DUI against somebody.  Are they going to be looking at complex factors like your blood alcohol level?  How was your driving?  How did you perform on the field sobriety tests? Those are the main things that they're looking at.

So, suppose your blood alcohol level was well over a .08, and you've got some lawyer or the office manager of a DUI law firm telling you they're going to get your case dismissed. In that case, that's probably not going to happen, and they're not being truthful with you because they haven't looked at all the evidence in the case. So, don't be fooled by people telling you stuff that doesn't make sense.  In particular, criminal defense — DUI cases are dealt with in a common-sense way.

Having a DUI lawyer puts you at an advantage because the lawyer you hire will be precisely honed in on all the helpful things to you.  Public defenders are good in many cases, but the one huge advantage that private lawyers have is that they have sat down with you before the lawsuit is usually filed.

They have the time to get all of the excellent information that can be used to help you, and they're going to be focused on the best possible result they can get.

What information can they gather to present to the prosecutor and the judge to get a good resolution?

BAC Near.08 Is a Valid Defense Argument

Having a good driving record is essential.  Having insurance is critical, but they're not the driving factor for a DUI.  If your blood alcohol is at or near the .08, you've got a good argument because the breath machine they use to test your blood alcohol level is not 100% accurate. 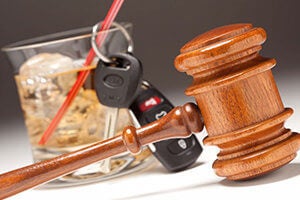 That's not just something defense lawyers are saying.  Even the prosecutors know that, and their experts will testify that that machine has an error rate of a .02.  So, if you blew a .08, you might have been a .06.  If you're a .06, you're not under the legal limit.

So, since they know that if you blew a .08, especially in Los Angeles County for a DUI, you have a real good chance of getting something less than a DUI.

That doesn't necessarily mean they will dismiss the case because a .08 is the legal limit.  If they can prove you're a .08 and prove that some factors show that you can't safely operate a motor vehicle, they might be able to win.  So, in that case, they may take the risk and take the chance to trial versus dismissing it.

How Were You Driving Vehicle?

Another factor they're going to look at is how you were driving.  In other words, if you're driving erratically, swerving around, or get in an accident, even if you were a .08, they have an argument that you're not going safely because you're under the influence of alcohol which is what the whole DUI law was meant to guard against.

A whole host of factors go into how the prosecutors decide whether to dismiss a DUI case, give you a lesser offense, or be harsher than they usually are with a DUI. There are other harmful factors that they can look at.  For example, if you were going very fast; if you got in an accident; if you hurt somebody.  The more dangerous they perceive you, the more likely they will punish you and force a DUI down your throat.

The more your defense attorney can show that you weren't dangerous — that you were fine; you passed a lot of their tests — the more likely it is to get something other than a DUI. Bet your bottom dollar on those field sobriety tests; many of my clients come in and say that they feel they passed those tests.  The bottom line is you didn't give them according to the police. Otherwise, they couldn't have arrested you.

They can't say you passed all of the tests and then arrest you.  That would be an unlawful arrest.  To stop, they're going to have to say, in their opinion, you were unsafe to drive, and you failed the test.

Sometimes they'll give you some passes or close to keys on some of the tests. That is very helpful to you and very helpful to me as a DUI defense attorney to say to the prosecutor, as you know, they say the person failed all the tests almost every time.

Look here; they've got him passing a couple of the tests.  That gives the defense attorney a strong argument that you were safe.  Those tests were designed to evaluate whether or not you can safely operate a motor vehicle.  They're very subjective tests.  It's up to the police to make the decision.

They're not always the best decision-makers because they're usually honed in on trying to catch people for DUIs.  They've been trained to do it.  They get awards to do it.  So, I don't have much confidence that they will be perfectly accurate in everything they say and do related to the DUI arrest. I am confident that just because you're a nice person, they're not going to dismiss your DUI case.  You'll need a tough, hard-hitting, intelligent DUI defense attorney by your side if you want to get the best result.