Driving on a Suspended License for DUI Conviction

This is a widespread crime.  I see it a lot.  Many people are coming in because they simply have to drive — whether for work or to get around.  Los Angeles County is a vast metropolis, and without a car, it makes it very difficult to do what you need to do to survive basically, financially and otherwise.

California Vehicle Code 14601.2 states a person shall not drive a motor vehicle when their driving privilege is suspended or revoked for a conviction of a violation of Section 23152 or 23153 if the person so driving has knowledge of the suspension or revocation.

This 14601.2 of the Vehicle Code is that this Section requires mandatory jail time.  In other words, they don't want people driving who have gotten a DUI and don't have their licenses together. You will likely face a driver's license suspension if convicted of a DUI.

Some specific punishments and requirements go along with getting your driver's license back.  You've got to get an SR-22; you have to have insurance.  So, they're going to put the screws, so to speak, to somebody who got a DUI is on DUI probation, and from their perspective, uh, has put the public at risk.

In other words, the legislature, the courts, the prosecutors, and the police are supposed to protect the public from individuals who decide to drink alcohol and drive, get in accidents, speed, hurt, and even kill other people.  So, they're so harsh with this driving on a suspended license when your license is suspended because of a DUI.

So, I'm trying to do as a defense strategy to convince the prosecutors to get rid of the 14601.2 and give you some other charge that does not require you to do jail time.  Not always easy t do, but obviously, I've got to get your version events.  You need to tell me exactly what happened.

Hopefully, you're not under the influence of any alcohol again when you get this driving on a suspended license.  Hopefully, it's just some innocuous pullover.  Sometimes I even see people getting pulled over from the courthouse. 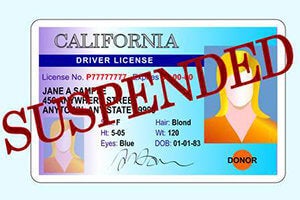 The people in charge of the H2O program know all the people coming to court on any given day who have DUIs who are not supposed to be driving, and they'll wait outside the courthouse and get people.

This will be where the prosecutors might want to put the person in jail.

So, if you want to avoid jail time, in my opinion, the only chance you have is to hire a reasonable attorney who can bring forth all the mitigating factors about you and your circumstances.

Hopefully, you weren't driving with alcohol in your system again, and you were going to work, for example, and you had no choice; you had to feed your family.  You didn't want to lose your job.  There was no other realistic way to get there.

The prosecutors will look at all of the facts and circumstances and the Judge.  Another issue you might have if you get busted for a 1460.2 is that you get a new charge and are facing mandatory jail time; you may be on probation for the DUI.  That will cause a probation violation.

So, now you have two problems.  (1) an open case; and (2) a probation violation, which you're not entitled to a jury trial, which is much easier for the prosecutors to prove because all they have to show is by 51% that you violated a law.

If that relates to your probation, if that refers to alcohol, or how it relates to driving, you will be in a much more difficult position. You need to get an attorney right away and start to talk to that attorney about what happened here and get an idea of precisely what you can do to get the best result in your case.

Getting Your Driver's License Back

But, if you can't get your driver's license back and you've got a 14601.2, you've put yourself in a difficult position.  If you tack onto the top that you've violated your probation, get to an attorney's office immediately.  Let that attorney start to put the pieces back together for you.

I've been doing this for 25 years.  I know how to handle driving without a license case, primarily related to DUIs.  We've got to start making moves now to put you in the best position when you go to court.

Related:
DUI And Driving On A Suspended License Cases